I think it was Jung who coined that word to describe a sequence of seemingly-unrelated events which concatenate and produce what seems an almost inevitable, unstoppable outcome. When it’s only two events, of course, we call it “coincidence”.

So after yesterday’s post about expensive watches, I opened the Daily Mail to be greeted with this headline: “Why the new arm candy’s on your WRIST“…

Vanessa Redgrave recently admitted hers is one of her most treasured possessions. Nicole Kidman’s, meanwhile, is so rare there are only a handful in the world.
Exclusive designer handbags dangling from the arms of A-listers are no longer catching our eye — they’ve been forgotten in favour of something rather more sparkly, not to mention elitist: a luxury watch.
Now that almost everyone is walking around with smartphones, and their built-in clocks, watches may not be the everyday essential they once were.
But with price-tags stretching to £250,000, straps of gold and alligator skin and diamond-crusted faces, these tickers are more status symbols than timepieces.
‘Watches have become much more of a statement than handbags because of their elitist prices,’ says Gabrielle Teare, a celebrity personal shopper and stylist based in London.
…
For the celebrities, meanwhile, a truly showstopping piece offers them the chance to show off their status — and how much top brands want to dress them — without looking as fussy and overdone as they would dripping in diamonds.
You wouldn’t wear £50,000 of jewellery on a trip to the shops, but you can easily get away with a watch that costs just as much and still look dressed down. It’s a sure way for celebs to raise their profile, particularly if the brand in question decides to return the favour by publicising the star’s allegiance to its famous name.

That’s me, all right: right at the spear point of fashion (for the first time in my life).

Oh gawd… just when I thought it was safe to wear a decent watch on one’s wrist… the fucking celebrities and luvvies have taken it over. Gah. It’s enough to make one wear a frigging Timex, or a discreet “pocket” (okay, belt-) watch like this one of mine, quite easily the unsexiest watch ever made: 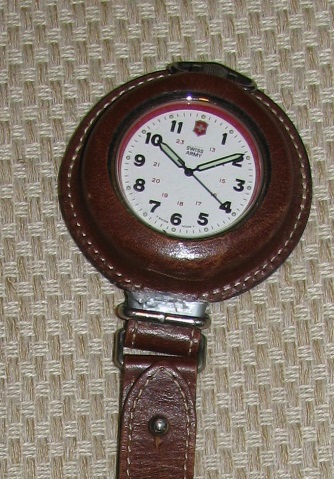 Anything to avoid being trendy…