As much as I always loved my old Smelly:

…I have to admit that the sights are not the best.  That teeny little V at the rear makes quick acquisition of the target a little problematic.

Such is not the case with the SMLE’s successor, the Rifle No.4 Mk I:

With the exception of the semi-automatic Garand, the No.4 was probably the best battle rifle of its era, because with its aperture sight and 10-round magazine, it combined firepower with combat-level accuracy, and its silky-smooth bolt action made for a fearsome weapon.

I’ve fired many a No.4, and never had a bad time with any of them.  My only regret is that I’ve never actually owned one.

Which makes this article all the more painful.

Early on a Sunday morning in June, a tractor-trailer backed into the rear parking lot of the Navy Arms warehouse north of Martinsburg, W.V. Inside the truck’s shipping container were four huge wooden crates containing a long-forgotten batch of British No. 4 Lee-Enfield rifles with a unique history. Two green, military-style chests, each brimming with plastic-wrapped bolts, accompanied the wooden containers. Inside the warehouse sat cardboard boxes filled with newly made No. 4 rifle magazines, waiting for their recipients to be offloaded. Valmore Forgett, III, president and CEO of Navy Arms, had shepherded these guns from their storage spot in France to this final point on a long journey that first started on C-47s, B-24s and B-17s flying over war-torn France.

As the crates were forklifted out of the shipping container, eager hands pried nails and loosened screws securing the plywood lids in place. Finally, the crate cover slid off, revealing a sea of bubble-wrapped rifles filling each box to the brim. It took the team at Navy Arms about a week just to unpack the carefully cocooned guns, while Val’s sons unwrapped each individual bolt from its plastic packaging, recorded its serial number and matched it to its rifle, wherever possible. After a brief wipe-down, quick swab of the bore and import-marking, the rifles were moved to a rack, where they awaited their moment under the camera lights. 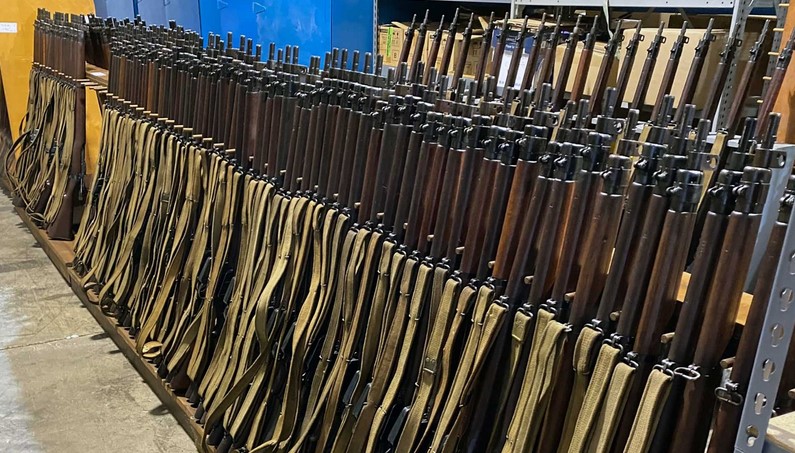 I don’t wanna talk about it no more because it just hurts too much;  you’ll have to follow the link for details, and more pics to drool over.

I’ll just go over to the corner and pout.