I’ve always had a yen for the WWI/WWII Italian Carcano M38 (6.5x52mm, a.k.a. 6.52 Carc), because as I’ve wandered through this life, trying all sorts of different guns, the Carcano somehow eluded me.  Specifically, I was interested in the later model with the folding pig-sticker, i.e. the Carcano Moschetto Modello 91/38 Cavalleria (Cavalry Carbine*):

(*The Italians didn’t have any cavalry;  what they did have were ceremonial mounted troops, but they were issued the earlier short M38 with the folding blade bayonet.  Got all that?  It’s more confusing than Ferrari nomenclature.)

Anyway, National Treasure (and Fiend) JimW persuaded me to pop off a few rounds through one of his Carcanos, and after the first shot my eyebrows disappeared unto my hairline, my mouth dropped open and well, I haven’t experienced such gun lust in the last twenty years of shooting.  Of course, the owner had no intention of parting with this wonderful little rifle, but I put my considerable negotiating skills to work, adding pleas, blandishments and in the end, a fat bribe and a swap of one of my own rifles (no details necessary).  And I bought a couple boxes of ammo from him too.

The bayonet isn’t bent out of true, by the way;  that’s how they were issued.  The design probably comes from Alfa Romeo or Maserati.

So, to business.  The Carcano uses an en bloc six-round stripper clip like the Garand, except that when the last round is chambered, the empty clip falls down through the hole in the mag well.  Sounds strange, and it is, but it works.  Many criticisms of the Carcano’s bolt action have been leveled:  gritty, hard, etc. but I have to say that while it’s no Lee-Enfield nor even a Mauser 98, it’s no Mosin-Nagant either;  and coupled with the mild recoil of the little 6.5mm boolet and a smooth two-stage 4lb trigger, it’s an absolute pleasure to shoot.

And on the latter topic, let us all sing hymns of praise to Prvi Partizan who, for a bunch of ex-Commies, have their shit together and make all sorts of cool calibers for gun geeks such as myself — including the 6.5mm Carcano: 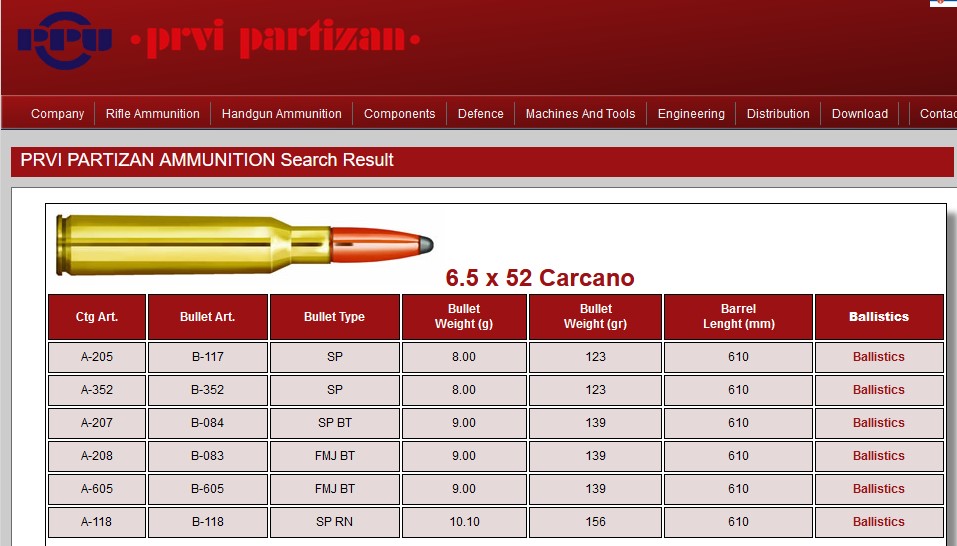 And there’s quite a bit available online, so as soon as I’ve ordered a half-dozen clips, the ammo will be next in line.

Ooooh I love shooting a new gun — not so much an out-of-the box gun, but one I haven’t shot much before.

Now, if you’ll excuse me, I’m off to the range.  Oh, and I have new glasses, so my sight picture has improved quite drastically.