Here’s Salena Zito, talking about the most famous highway pit stop in America:

Everything about Wall Drug, arguably the most iconic and long-lasting drug store in America, exemplifies a doggedness. It took persistence not only to survive but also thrive against insurmountable odds in a place few thought a small business had any business starting an enterprise in the first place.
In 1931, when Ted Hustead and his wife Dorothy were looking for a place to open a drug store, he told the local paper years later he picked the thinly populated town of Wall because the local doctor told them he’d give them all his prescriptions.
Despite all their hard work, though, most of their potential customers passed their little prairie town along the highway, rarely noticing the store.
The Husteads’ dire future all changed one hot summer night when Dorothy Hustead could not sleep. Irritated that the parade of cars along U.S. 16 was keeping her awake, she wondered how could they make all of those people at least stop at their store and maybe buy a thing or two.
Out of that mild irritation came a plan: Plant signs along the highway offering free ice-cold water to weary travelers. And not just any signs, but clever ones like the humorous Burma Shave signs that were famously posted all along small highways in the 1920s.
Her idea was both simple and genius. More importantly, it worked.
Within a year, they went from no employees to eight, and the signs went from a handful to hundreds of billboards. And today, Wall Drug is a 76,000-square-foot, multimillion-dollar slice of Americana where you can still get your prescription filled, but you can also get hand-crafted moccasins, divine homemade donuts, out-of-print books on the American West, cowboy boots, clothing, ice cream, western art, homemade pies, and bumper stickers. If they don’t have it, it’s probably not made.

I’ve been to Wall Drug.  And unless it’s fallen off the display, you can see my picture (along with thousands of similar ones) inside. 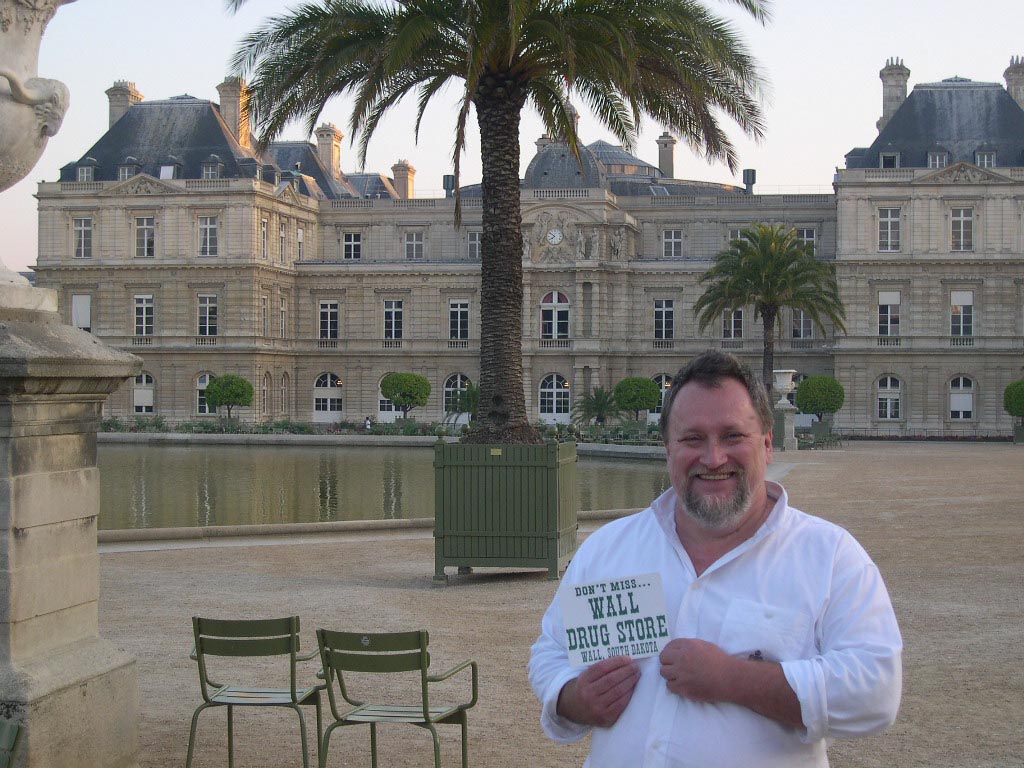 That was taken in September 2004, in the Luxembourg Gardens, Paris.

By the way:  I bought some gun gear at Wall Drug, and when we stopped at the Cabela’s store in Mitchell SD, I saw exactly the same stuff — only priced about 20% higher.