This is going to be a somewhat esoteric series of posts — i.e. of limited interest to most people — but hey, variety is the spice of whatever, right?

As with all things, your opinions may differ from mine — in this series, it’s about “sound” and “feel”, and no more divergent criteria exist — but there ya go.

Today we are talking  about amps for electric guitars and bass guitars, because I’m sick of seeing clickbait links to some guy talking about the “best” or “best ten”, and finding myself in complete disagreement not necessarily because of his choices, but of his test equipment and criteria.  I have a few prejudices on the topic (based on years of playing in a rock band), but I want to set the ground rules — testing standards, really — right up front so we can all see the “truth”, so to speak.

Typically, we see the tester (almost always a guy) holding a guitar and extolling its virtues, maybe riffing a little to make his point, and so on.  Then we see that what’s really happening is that he’s playing said instrument through a whole bunch of pedals which enhance or otherwise improve the sound.  And who can make a judgment based on that?  Even worse is when these guys then try another instrument, but through a whole different bunch of pedals and another type of amplifier.

In the testing business, that’s called “bullshit” (I know, a very technical term), because the essence of testing is that it has to take place in a common universe or using identical testing procedures / equipment, or else it’s just nonsense and we end up with that tiresome (but accurate) cliche of “apples to oranges” and such.

When testing a guitar, lead or bass, find ONE amp and use it for all your testing.  The guys at Sweetwater generally do it right in their demonstration videos, usually using a Fender Twin Reverb 85w amp in some shape or form.  I happen to think that the venerable Twin Reverb is the greatest guitar amp ever made, and all others differ simply in terms of their sound, whether the Vox AC-30, the Marshall 1959 or the Mesa/Boogie Mark Five.  (All would be excellent choices as a test amp, by the way, but the Twin Reverb has the cleanest sound and therefore makes it a first among equals.)  Generally speaking the simpler the amp, the better (for testing purposes), which means that all the “modeling” amps (which use electronic trickery to mimic sounds of other amps) are a waste of time, unless you use the same amp voice consistently.  But few do.  As a test bed, simpler is better, and the Twin Reverb is an outstanding choice. 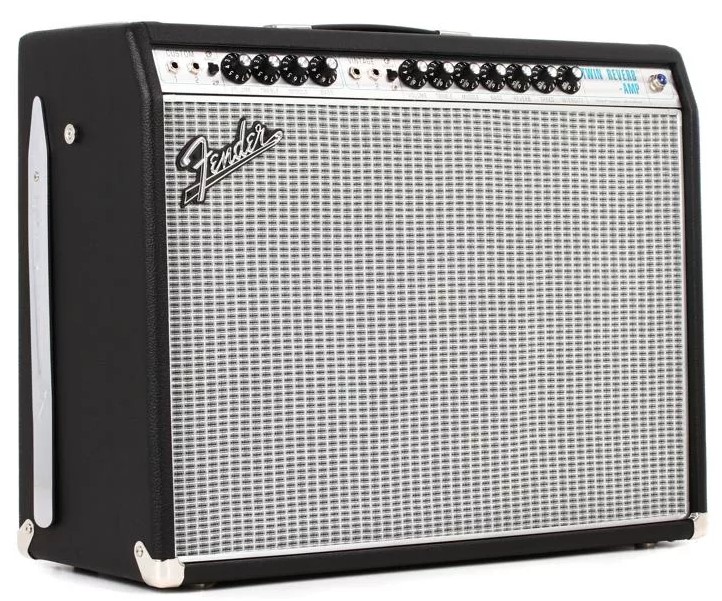 If I were a lead guitarist in a gig band, my top 3 choices for an amp would be:  1.) Fender ’89 Custom Twin Reverb, 2.)  Fender ’65 Twin Reverb and 3.) Marshall JVM210C 100w.  (If you want to see how they sound, go to their respective links and scroll down till you get to the demo videos.) Note that whatever amp I chose, the type would be a combo (amp and speakers in the same cabinet), because when you gig, it’s easier to carry an amp in one hand and a guitar in the other, and combo amps pack more easily in the van.

On another note, I prefer the sound of valve guitar amps, but valves do degrade over time — I know, like batteries in a guitar — but the downside of a solid state amp is if a transistor goes (it does happen, it’s happened to me), you’re left with silence;  if a valve goes, the others will keep on going until you get to put in a new one.  But nothing beats the velvety sound and smooth distortion of a valve amp, which is why 90% of the world’s guitarists use them.

When it comes to bass amps, I’m (surprisingly) in favor of solid state amps.  I’ve used both (Fender Bassman and Orange for valves, and Roland for solid state), but the reason I prefer transistor-driven bass amps is that I like a simple, clean bass tone (it’s a rhythm instrument and not a lead one, although people like Mark King and Billy Sheehan have blurred the lines somewhat).  And speaking of the aforementioned virtuosos, while I envy greatly their skill, I happen to hate the sound that each uses:  King’s is very thin to my ears, and Sheehan’s is dirty — the very antithesis of what I like to produce.  For those interested, here’s a list of some other bassists;  the rankings are unimportant, because any one of them could have been in the top 20, interchangeably.

Once again, if I were going to go out and gig today, I’d probably use a Roland Cube 120XL (because they don’t make my old rig, the RB-120 anymore, the fools): 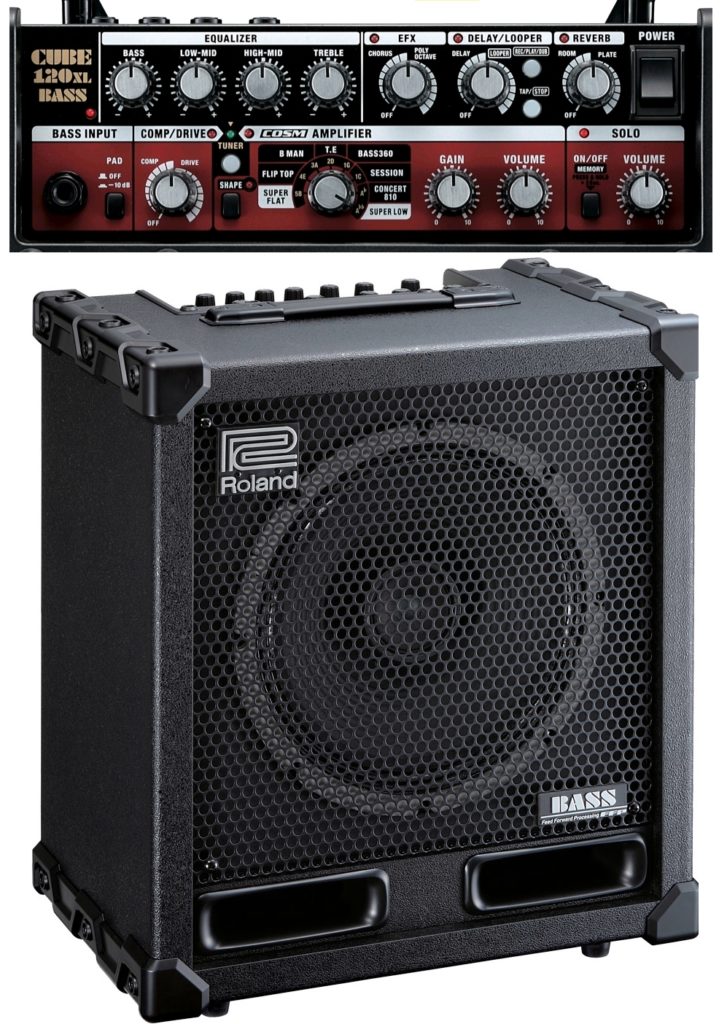 I know, it’s got a modeling feature (COSM), but I’d only ever use one — the “Session”, which is essentially their old “Studio” bass amp circuitry, and one of the best-sounding amps ever made.  They stopped making that amp too, the idiots x2. (I have a Cube XL-30 right now, as it happens, and I love it.)  The Cube series of bass amps are also wonderfully light, which is no small thing for gigging.

Side issue:  Roland does this all the time — introduce a brilliant amp, then discontinue it after a few years — and it irritates the shit out of me.  Their GA-212 guitar amp was the coolest one ever, and it lasted about five years before they ditched it.  The only one they’ve never had the nerve to kill is the peerless Jazz Chorus, and which would be one of my solid state amps of choice for a gig.

Simple is best, for me.  All there needs to be is gain, volume, treble, mids and bass controls, and Kim’s a happy camper.  Something like this: 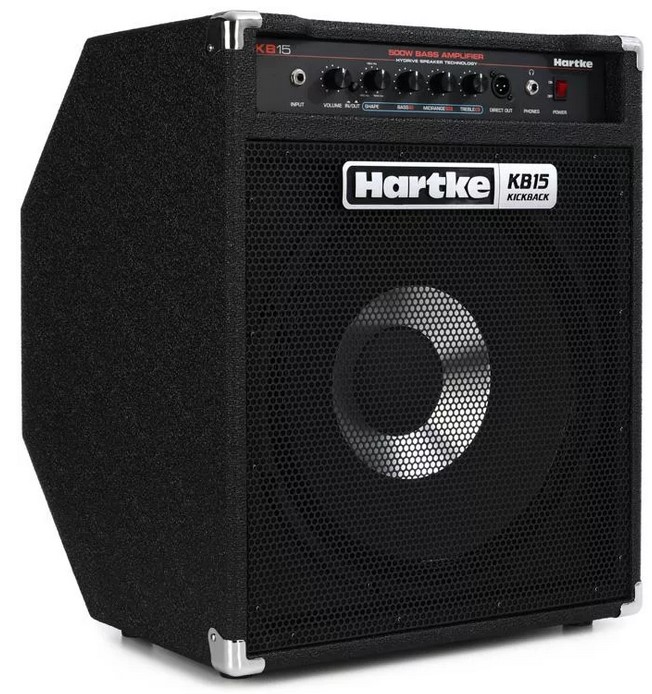 I need the power because I keep the gain (pre-amp drive) low to prevent distortion, ergo  I need more power at the power amp stage.  And as for the speaker:  bass is all about moving air, and a 15″ speaker moves air better than a 10″ or even a 12″ — and it handles bass frequencies better, in my experience.  I’ve played the Kickback before, not at a gig, and I was astounded at the clarity of its sound.  (Also, bass virtuoso Victor Wooten loves the Kickback, so who am I to argue?)

Okay, so we’ve established the amps I’d use, whether testing or for a gig:  the Fender Twin Reverb for guitars, and the Hartke Kickback for bass.  Tomorrow, I’ll rank my favorite guitars of each type.