The story of the film so far:

Apartment is still closed, some standing water, interior is humid like New Orleans on a midsummer day after a rainstorm, but cold like Chicago is… now, come to think of it.  No water, of course, but occasional electricity(!!)

The hotel’s wifi is still down (WTF?), but I can make a temporary hotspot with my phone and communicate with the outside world that way, except that the download time is measured in units like the old dial-up/modem connections (remember them?) so I’m not going to be anywhere like as much as I normally am.

– Good news is that I don’t think the insurance company is going to try and screw us, but time will tell on that one.  So far they have been nothing but understanding — especially when I told Insurance Agent Man that a.) the guns weren’t damaged and b.) we’d managed to keep the Persian rugs away from the water.  The sigh of relief was quite audible.

– Bad news is that because New Wife is an hourly worker, she’s not going to get paid for this past week because her school was closed, so… you know all those generous contributions y’all have been making?  Noses above water, especially as next week is Car(s) Payment Time — and once again, our sincerest thanks for your generosity.

I’ll try to post more, but please bear with me.  Aaaaargh.  In the meantime, here’s something to put a smile on your face: 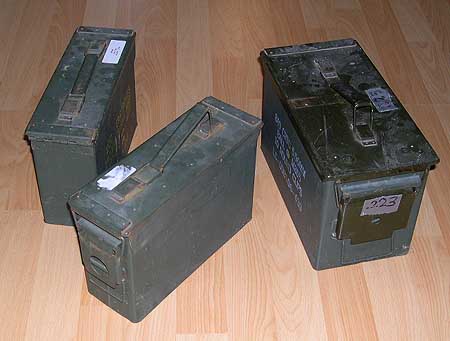 Update:  For all those interested in the “spare ammo”, I’m sorry.  As soon as I found it, I found it a good home because I didn’t want to hassle with it, and posted about it much later.