Back when I worked for the Great Big Research Company in Johannesburg, I had a boss who had the unnerving habit of doing random checks on my calculations.  (I should point out for my Readers who were born after we discovered the wheel that computations were done not with slide rules but with the newfangled invention called a “calculator” — which could do only the basic math functions of addition, subtraction, multiplication and division — and the literally thousands of numbers were taken off pages and pages of computer printouts from a thing called a “mainframe”.)

Anyway, if the Poison Dwarf (as we not-so-jokingly called him) discovered a single mistake, he would tear it all up and make me redo the entire job, with the rationale that “If I can’t trust one thing, I can’t trust anything.”  The result, after only a couple of these episodes, was that I not only took an inordinate amount of time in performing the calculations, but spent almost as much time rechecking everything to make sure that absolutely every statistic or number I presented to my clients was 100% correct, and they could take the actions I recommended with complete confidence in the strength of the data.

That habit persisted with me for the rest of my working career.

I say all this so everyone will know exactly where I stand on bullshit like this (with emphasis added):

A young Florida resident who died in a motorcycle accident is included in the state’s official COVID-19 death count, a state official reveals.
FOX 35 News in Orlando discovered this after asking Orange County Health Officer Dr. Raul Pino about two young COVID-19 patients in their twenties who died, and whether they had any preexisting conditions that contributed to their deaths.
“The first one didn’t have any. He died in a motorcycle accident,” Pino said. Despite this shocking answer, Pino was not aware of this person’s data being removed from the state tally when asked.
“I don’t think so. I have to double-check,” Pino answered. “We were arguing, discussing, or trying to argue with the state. Not because of the numbers — it’s 100… it doesn’t make any difference if it’s 99 — but the fact that the individual didn’t die from COVID-19… died in the crash.”

You stupid fucking quack.  It’s not whether it makes a difference between 99 and 100 — it’s how many more mistakes of this kind have occurred in your compilation of the data.

So if one death (1%, in this case) was incorrectly attributed to the Chinkvirus, how many more cases are incorrect?  10%?  20%?  90%?  We don’t know, because the numbers were obviously not checked after being submitted.

Here’s something from Powerline which makes the same case quite succinctly: 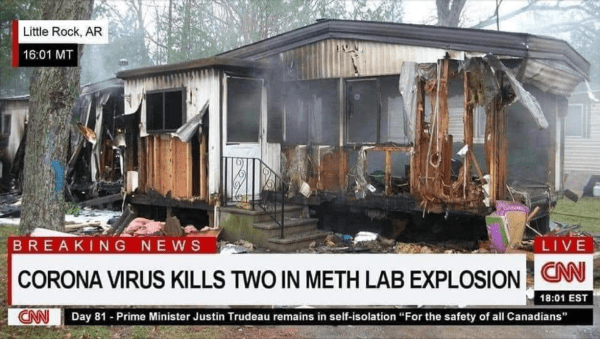 Funny, but not so funny.

Here’s the thing.  A lot of decisions, very weighty and momentous decisions, are being made based on the data our much-vaunted medical establishment is presenting.  States’ economies are being damaged or destroyed, people’s livelihoods ditto, and I’m not even going to start to estimate the social cost of foolish governmental decisions taken on the basis of what may turn out to be fatally-flawed data.

So I’m going to mimic the Poison Dwarf (for the first time ever):  I’m not going to trust a single fucking piece of data these assholes present to us, ever again.  As far as I’m concerned, it’s all lies and bullshit, and I don’t trust any of them.