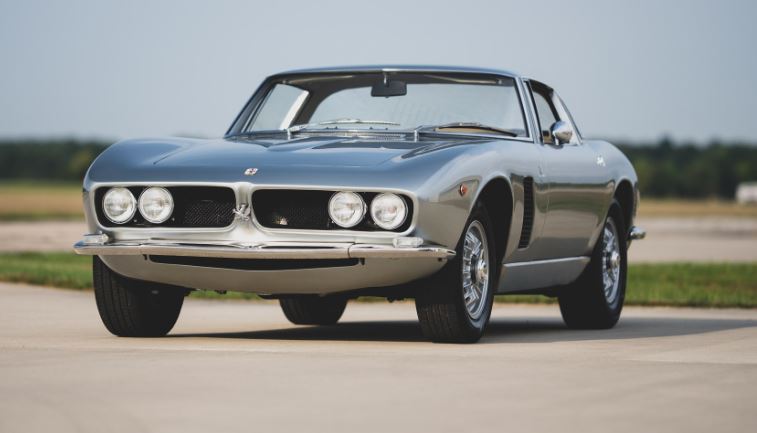 For those not familiar with this monster, here’s the background (from Sotheby’s):

The Iso Grifo was created by a powerhouse of Italian engineering talent, including former Ferrari chief engineer and “father of the GTO” Giotto Bizzarrini; designer Giorgetto Giugiaro; and revered coachbuilders Bertone. A muscular gran turismo, its Bertone-built coachwork surrounded an advanced chassis with de Dion rear axle and inboard brakes, a configuration that reduced the unsprung weight compared to a live rear axle. Power was provided by a Chevrolet 327 V-8 of the same specification used in contemporary Corvettes, endowing the Grifo with ample performance and fine reliability. The model remained in production into the early 1970s and saw a total run of 413 examples in all configurations.

Excuse me, but “engineered by Bizarrini, designed by Giugiaro and built by Bertone”  just about checks all my boxes.  Also, “Chevrolet 327 V-8”  means I could get its oil changed at the local Chevy dealer for $50 instead of paying two grand to have the same thing done by Ferrari on one of their engines.

And it’s beautiful.  Good grief, I would get a tingle just from seeing it parked in my garage when I went out in the morning — even if I wasn’t going to drive it.

Finally, note that the interior is wonderfully devoid of all the modern electronic shit that confuses, clutters and just subtracts from the MTBF (mean time between failures).  And a stick shift… performance, simplicity and elegance all in one package