I hardly ever talk about the coronavirus, and I’m heartily sick of the topic.  So here’s a pic of a gun that the idiots at Browning decided not to continue producing, the semi-automatic Browning Gold Hunter:

Connie had one of these until her health problems curtailed her shooting activities, and so I sold the thing (because I’m a bigger idiot than Browning).  I’ve regretted doing that ever since.

I loved this gun.  It had almost no recoil — certainly much less than my own Browning Sweet 16 — and many’s the day we spent shooting at clays, golf balls and actual watermelons with it.  Randy Wakeman feels the same as I do:

The [Gold Hunter] 20 gauge, in particular, is just an amazingly soft shooter. Not a flyweight in standard configuration, with 7/8 oz. dove loads the recoil is exceedingly mild; you can barely feel the gun working.

He has a gripe about the Gold Hunter’s trigger, but ours was light and smooth as silk.

I have to say that if ever I stumble across one at a gun show in good condition and at a reasonable price, it’s going to come home with me faster than Carol Vorderman, seen here in RealTree camo. 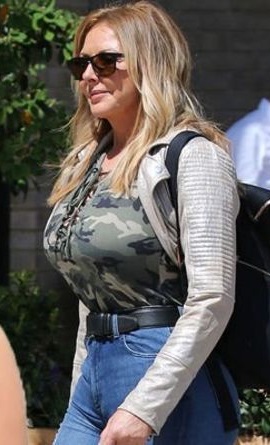 (That’s called a “twofer” — Gold Hunter + Carol — by the way.  Anything  to forget about the Wuhan Virus.)