I am often mocked because of my fondness (if not favoritism) of things of yore over their modern counterparts.  This is especially true of gun stuff, and cartridges especially.  (Executive summary:  not many cartridges developed since 1955 are that much better than their predecessors.)

One of my all-time favorites is the venerable .300 Holland & Holland Magnum, which was essentially put out of business by the .300 Winchester Magnum.  Why am I so enamored of this old warhorse (launched 1925)?

I once hunted with a borrowed rifle thus chambered many, many years ago in South Africa (I think it was either a Sako or a Sauer, can’t remember which) and in a single day’s shooting accounted for two or three impala, all of which were absolutely flattened by the heavy 180gr solid bullet.  I found the recoil far less punishing than other magnums (both the .300 WinMag and the monster .458 WinMag), and the effect on small- to medium-sized game was little different from either of the two others.

It’s not as hard-hitting as the other two, of course, when one looks at the raw numbers;  rather, the .300 H&H should be compared to the .30-06 Springfield.  Here’s a side-by-side of the Nosler offerings for each cartridge with the same bullet weight: 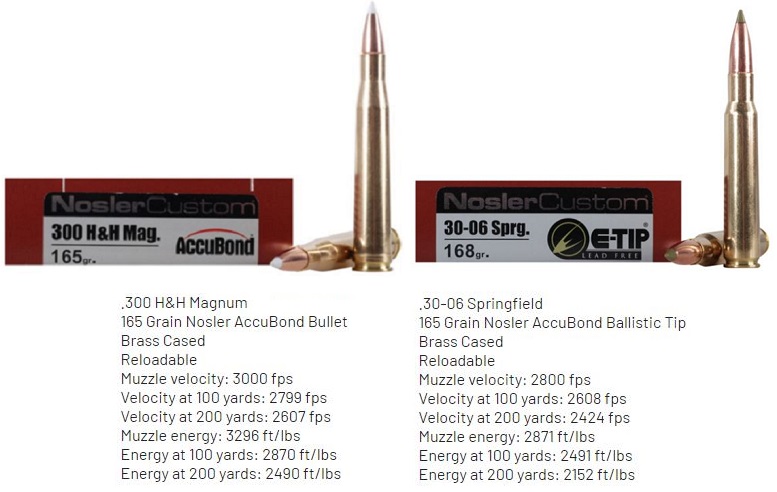 The Holland’s longer case holds more powder, I think, hence the slight velocity/energy difference.  Likewise, the rifle’s action needs to be a little longer than that of the .30-06 (which is already longer than, say the short-action .308 Win).

It’s not quite a like-for-like comparison because of the greater bullet weight, but where the difference becomes apparent is at ranges long than 200 yards (.300 H&H 2,490 vs the .300 Win Mag 2,520, and the differential widens at longer distances).

That said:  if I had to shoot twenty rounds rapid of each, I’d be okay after the .300 H&H, but would require some kind of medical attention with the .300 Win Mag.

And I’d sell a non-essential body part to be able to shoot them through one of these.  (“P.O.A.” stands for “piss off, arsehole” i.e. “if you have to ask, you can’t afford it, peasant”.)