Yup, it’s that time again.  (“That time” being wherein I discover, and not for the first time, that I am totally crap at long-range shooting.)

I just registered for Boomershoot 2020, so I’ll be up in central Idaho on May 1-3, driving all the way up from Texas for the three days prior, and all the way back down for the three days thereafter.  (I drive because of all the gear one needs to make Boomershoot feel less like the Somme circa  1916 only without being machine-gunned by Huns.)  I have not been to Boomershoot for fifteen years, and I very much doubt whether my skills have improved over the intermission. 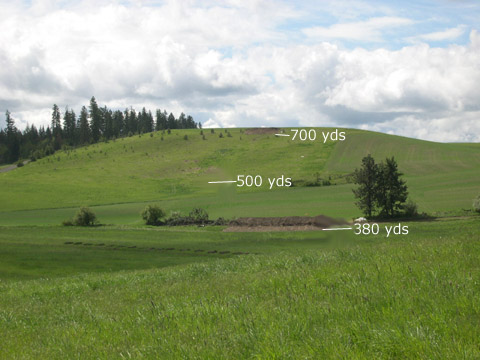 So why am I going?  Well, I missed Mr. Free Market’s last trip to Scotland for the annual deer stalk in appalling weather conditions, so I need to punish myself — it’s the gunny equivalent of a hairshirt, to quell any feelings of pride and/or adequacy I may feel in my shooting skills, such as they are, and to remind me that shooting generally doesn’t take place in an air-conditioned indoor range, nor even in clement weather.

Organizer Joe Huffman, national treasure that he may be, is not responsible for the drenching rainstorms which sweep the area periodically, nor for the scorching sunshine when it’s not raining.  Nor is he responsible for the variable 20+ mph winds which sweep across the field, and which make shooting at inch-sized targets (at 400 yards) such an  ummm interesting  test of one’s ability to judge the likely fall of shot at the target.

So I’ll be acquiring at some point a new rain/sun shelter and a new shooting bench (the old ones having disappeared without trace into the mists of time during my fifteen years’ absence): 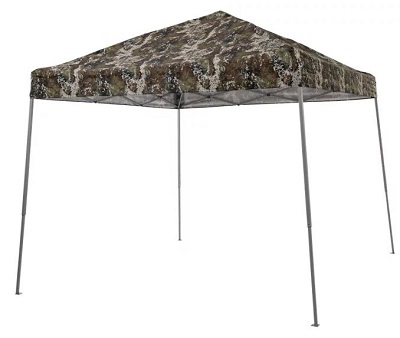 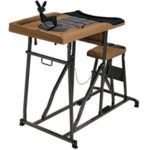 Not quite sure at this point what rifles I’ll be taking up.  The Son&Heir may be accompanying me (his work schedule permitting) in which case the Swedish Mauser will be putting in a repeat appearance*.  I hope he does make it:  he’s as good a spotter as he is a shooter — and at BS, a spotter is mandatory (unless you just want to shoot hundreds of rounds into the ground around the target).

But the rifles… previous experience at BS has shown me that hunting rifles (even ones as good as my Mauser M12) just don’t cut it.  You need a heavy rifle and a heavy barrel (the latter to handle the high rate of fire), and most hunting rifles’ barrels just overheat and the lightweight stocks don’t give you a steady shooting platform.  Here’s a pic of what I mean:

I don’t have anything like that, nor do I want to shoot a heavy bullet, despite the advantages that would bring in a stiff breeze.

I’ll be thinking about the problem over the next couple of weeks, but I’m leaning towards 7.62mm NATO / .308 Win in addition to the 6.5x55mm Swede I’ll be bringing already.  Here’s an idea of what I’m talking about:

All suggestions (especially from Boomershoot veterans) are most welcome.

*A brief word of explanation:  the S&H doesn’t enjoy shooting through a scope because, and I quote, “there’s no artistry  involved, Dad” and thus prefers to use iron sights at 400 yards.  Last time, he hit six boomers out of fifteen shots fired — in other words, as the 400-yard boomers are 4″ square, shooting MOA with iron sights, the bloody showoff.  Even the Fort Lewis Army snipers were impressed.  We’ll see if his 30-year-old eyes are up to what his 15-year-old eyes managed.