Of all the countless handguns I’ve ever fired, the Colt 1903 probably ranks in the top 3 in the “Most Pleasant To Shoot” category. 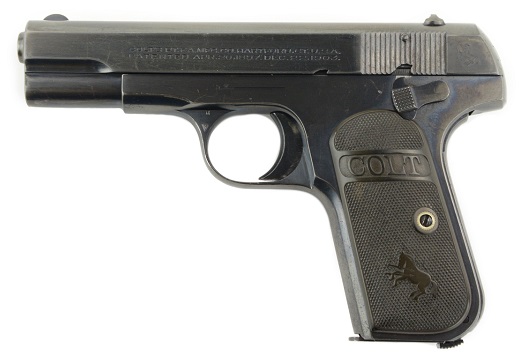 There are a couple of things that gunnies may sniff at:  the “European”-style mag release (which John Moses Browning, the 1903’s designer, would rectify with the 1911), and of course the poodleshooter .32 ACP cartridge it fired.  Here’s a close-up of the mag release mechanism:

None of this matters.  I’ve probably fired half a dozen of these beauties, in varying conditions of use / neglect, but each one was silky-smooth where it mattered:  in the action thereof.

I remember firing one in particular at one of Combat Controller’s schutzenfests  down in Austin many years ago.  The owner — whose name I’ve forgotten, sorry — had had it professionally reblued in Colt’s “Royal Blue” finish. The gun was so beautiful and shot so beautifully that I nearly fainted.  Had I not been a guest, and the owner not a fellow member of the Nation of Riflemen, I would have stolen it.  I offered to buy it from him on the spot at any price he cared to name, and he just laughed at me.  Can’t say I blame him, but I still pine for it like I pine for very few other guns.

It’s probably for the better.  I beat up my handguns pretty badly because I shoot them so often and for so long at each range session, and it would break my heart to destroy a 1903, even though the shooting, while it lasted, would be as fine as the caress of a pretty girl’s hand.

Which brings me to the next point.  I think that the 1903 — poodleshooter cartridge notwithstanding — would be a fine choice for a lady’s concealed piece:  it’s light, reliable, easy to conceal and gentle to shoot.

I’ve also fired the later-model 1908 which is chambered in .380 ACP, but as I recall, it wasn’t as much fun to shoot as the smaller chambering.  (The two models are to all extents and purposes identical but for the cartridge.)

Predictably, these fine guns are spendy, costing well over a thousand bucks (cheaper, and they’re probably not going to be reliable and/or beaten up.)  Magazines, when you can find them, cost more than Pirelli Cinturatos.

To my mind, though, if you have your existing shooting needs taken care of (e.g. with serious guns shooting manstopper cartridges), you could do far, far  worse than to add one of these lovely little guns to your collection.  Here’s an excellent write-up of its history.

(Pics courtesy of Collector’s Firearms, probably my favorite gun store of all.)