My abbreviated honeymoon last weekend had one additional benefit:  it brought three old friends back into my life.

During the Great Poverty Gun Sell-Off (when I was forced to sell guns to pay medical bills), several kind and generous buddies came to my aid, buying several of my guns from me — with the caveat that should they ever decide to sell them, I would get right of first refusal.  (There was a hidden danger, of course:  that they would fall in love with the damn guns and refuse to sell them back  to me, which actually came close to happening with one.)  Recently I had a small windfall which made their buyback possible, so…

Anyway, here’s one of them, which I managed to persuade Longtime Friend Mark C. to sell back to me.  This is my prized Browning High Power 9mm, which had been on permanent loan to Connie.  Sadly, as her health deteriorated, she was no longer able to operate it and, well, there were doctors which needed paying, so onto the block it went.  But now it’s home again.  This was how it first arrived in the house: 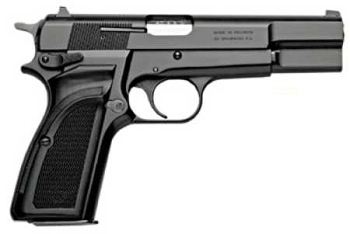 …and this is how it looked when Reader Mark took possession: 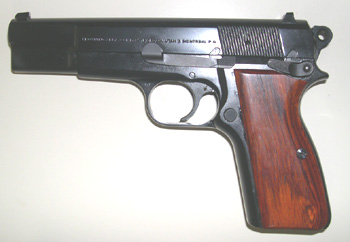 I will soon (very soon) be reacquainting myself with this beauty at the range, maybe even this afternoon or tomorrow.  If I love it as much as I remember doing, it may well replace my 1911 as a primary carry piece.  (I know, I know, 9mm Europellet!  Say it ain’t so, Kim!!!  But as Loyal Readers will recall, the 1911’s .45ACP ammo has been beating up my old wrists badly… and anyway, pistol cartridges have come a long  way since 2004.  Right now it’s loaded with this new offering from SIG, which seems to be all the rage with the 9mm Smart Set.) 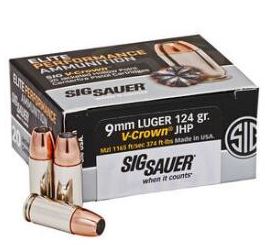 …and my bulk ammo order from the ammo dealers on my sidebar will follow shortly.  One problem:  I only have one mag for it, the original issue.  But a visit to the next Evil Loophole Gun Show (ELGS™) should provide me with some of those doubleplusungood 13-rounder magazines — you know, the ones which give the gun-controllers fits.  Five or six should do the trick, yes?