The world needs more — a LOT more — of this:

Right-wing nationalist Jair Bolsonaro, who has vowed to crack down on political corruption, violent crime and ignite a moribund economy with deregulation and fiscal discipline, after being sworn in as Brazil’s president today.
The former Army captain and seven-term fringe congressman rode a wave of anti-establishment anger to became Brazil’s first far-right president since a military dictatorship gave way to civilian rule three decades ago.
Addressing a joint session of Congress minutes after taking the oath of office, Bolsonaro, a former Army captain and admirer of the country’s 1964-1985 military dictatorship, vowed to adhere to democratic norms.
He said his government would be guided by the promises he made to Brazilian voters fed up with graft, high levels of violent crime and a still-sputtering economy.
‘I will work tirelessly so that Brazil reaches its destiny,’ Bolsonaro said after being sworn in. ‘My vow is to strengthen Brazil’s democracy.’
On the economic front, the new leader promised to ‘create a new virtuous cycle to open markets’ and ‘carry out important structural reforms’ to shore up a yawning public deficit.

Last week, the former army captain said that upon taking office he would issue a decree guaranteeing Brazilians without a criminal history the ability to possess firearms. During the campaign, Bolsonaro argued that one way to confront street crime would be to arm more citizens.
Possession of firearms is currently tightly restricted in Brazil, though drug traffickers and other criminal gangs are heavily armed with automatic weapons. Brazil is the annual world leader in total homicides – more than 63,000 in 2017 – and a majority are from firearms.
Bolsonaro has frequently argued that police who fatally shoot criminals during operations should be decorated, not prosecuted. To that end, he has said they should be shielded from prosecution, possibly by having such cases be investigated in a separate process outside the criminal justice system.
Such ideas terrify human rights groups and people who live in poor neighborhoods, where shootouts between police and traffickers often leave criminals, officers and innocent bystanders dead. Some Brazilian police forces, particularly in Rio de Janeiro, are already among the most lethal in the world.
Bolsonaro has frequently expressed adoration for U.S. President Donald Trump, and he is poised to follow him in foreign policy. He has promised to move the Brazilian Embassy in Israel from Tel Aviv to Jerusalem; push back on China, Brazil’s largest foreign investor; ditch regional trade treaties he thinks are bad deals for Brazil; and take a hard line on leftist governments, including that of neighboring Venezuela.

Anyone seen his Missus, by the way? 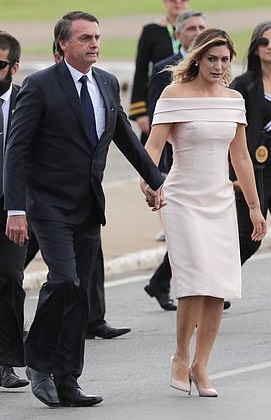 I think he has the right perspective on just about everything.