One of the good things about not having seen South Africa since 1986 is that the changes that have come about are massive — no slight incremental ones, just vast ones.

The best thing that’s happened is that everything happens in English — no more mandatory English/Afrikaans nonsense — and even in Pretoria, the most Afrikaans of cities, you’re served in English even when the store employee is Afrikaans. This is a good thing because nothing divides a people like not having a common language, and it is appallingly inefficient to have to do everything twice. Afrikaans is still spoken in conversation, and even the English-speakers still scatter Afrikaans phrases into speech if the term is best expressed thereby. (We do it too with other languages, e.g. using a German word like schadenfreude because no similar word exists in English; and a mischievous Afrikaans term like stokkiesdraai works so much better than playing truant.) On the whole, however, English has become the de facto language of not only commerce (which it pretty much always was) but of government. It’s a massive change, and a very good one.

Johannesburg has grown beyond comprehension. The decay of the city center into a Third World hellhole has meant that expansion into the outer areas has been almost geometric. The population of metro Johannesburg, when I lived here, used to be about 1.5 million; now it’s nearly 4.5 million; and Greater Johannesburg (what used to be called the Witwatersrand) has gone from about 3.5 million to 8 million. Along with this has come traffic, lots of traffic: at midday, the freeway system (which is excellent — better than that of Dallas or even Chicago) looks more like Los Angeles than anywhere in Africa. The major roads are (amazingly, to me) uniformly excellent — much better than in any U.S. city, and where Dallas tries to get by with an eight-lane highway bypass, Johannesburg uses twelve lanes on its N3. Also, instead of concrete slabs, Johannesburg freeways are seamlessly tarred, which means a smooth, almost silent ride. The surfaces are very well-maintained, and it’s only the small suburban streets which are showing their age.

Those massive highways are needed because another amazing change has been the explosion of commerce and industry along the Johannesburg – Pretoria corridor. Where once they were two distinct cities, with vast areas of open veldt on each side of the various freeways connecting them, the highways between the two cities now look like those between Los Angeles and San Diego or Dallas and Fort Worth: hundreds of factories, warehouses, townhouse developments and office complexes. The little town of Fourways, north of Johannesburg, which was once literally just that: a four-way intersection of two 2-lane roads with a shop at only two adjacent corners, is now a dead ringer for Plano, Texas, with several highway interchanges and a plethora of office complexes and housing developments — and Fourways has now blown over its boundaries and the development has moved to the area known as Midrand — in my time a couple of warehouses and a cement factory and gravel pit — which now looks like any exurban area in the United States such as Thousand Oaks or San Jose, in California. Even my old hometown of Bedfordview, once a sleepy little suburb which fed Johannesburg with a diet of middle-class workers, is now a town in its own right with several large shopping malls and a couple of restaurant-rich complexes which, when I visited one, was filled with diners. Which leads me to the next point.

None of the above would be possible in a Whites-only environment. When I lived here, South Africa had an economically-active population of about 6 million people (out of a total of about 30 million). Now the economically-active population is, at a rough guess, about 25 million (out of 40 million). The emergence of a large Black middle-class means that Johannesburg can truly call itself a proper city at last. None of the restaurants or businesses could exist on a White-only clientele, and a full 40% of the diners at the Turn ‘n Tender restaurant in Bedfordview (where I had lunch yesterday) were Black: well-dressed suburbanites driving late-model BMWs, Land Rovers and Mercedes, as well as VWs, Renaults, Citroëns and Toyotas. And as I sat there eating my lamb stew (pic below), a black family was sitting in a Bentley as it purred past on its way to the exit.

I expected that the annual inflation rate (officially 12%, but actually around 15%) would have rendered prices to be on a par with (say) the U.S., but not so. A good-sized 4-bedroom house on a quarter-acre in a Plano-type neighborhood will run about $300,000. I don’t know if salaries have kept up, but I suspect not; which means that the relative price is probably closer to $500,000 — which makes it very close to U.S. levels. Still, I’ve been heartened by the evidence of Black families owning houses in the well-to-do neighborhoods — also on a par with Plano, at a rough guess.

Those are the good changes I’ve found. Tomorrow I’ll talk about the changes which have jarred me.

Aside: I’ve been indulging myself on South African food whilst I’m here; after all, I can eat steak and spare ribs in Dallas and fish & chips in England, anytime. Yesterday was Lamb Potjie (“little pot”), which as the name suggests, is served at the table in a small 3-legged iron pot, thus: 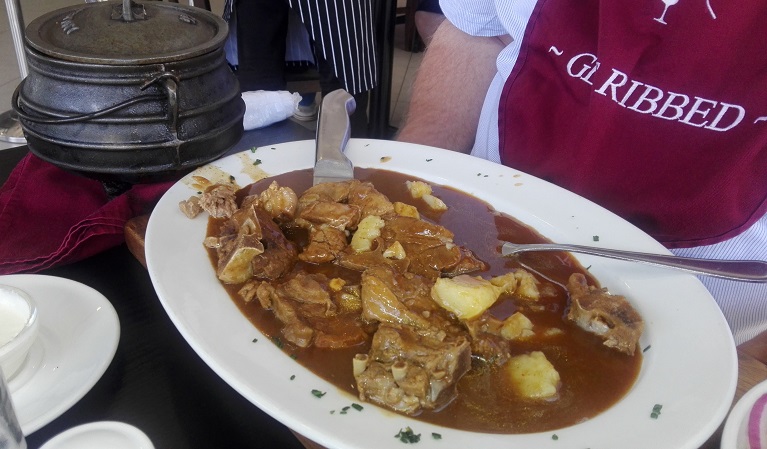 You’re supposed to leave it in the pot and just serve it piece by piece, so it stays warm in the pot, but I dished it all out so y’all could see the quantity, which could easily serve two people (I’d already had a couple mouthfuls before I remembered to take the pic). Cost: R95 ($7.25). That’s one thing that hasn’t changed: food is good, and not expensive. That quantity of food in London would have cost at least £27 ($36).

I went out to dinner with three friends the other night. I picked up the tab for dinner — which included steak / seafood main courses, desserts and wine — and the bill came (with tip) to R1,100 ($87). Tips, by the way, are 10%, and not mandatory. I raise eyebrows by tipping 20%, because the service has typically been outstanding; and I should also add that the waiters have all been Black (another massive change since I left).

Grocery store prices are incredibly low, by the way. I won’t bore you with the details, but allow me to show you some pics of a store called “Food Lover’s Market” in Pretoria: 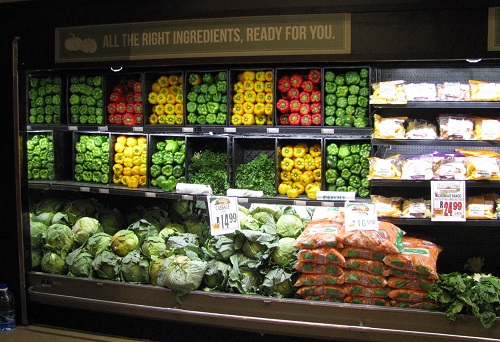 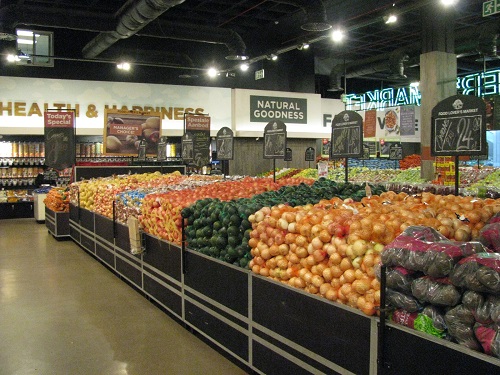 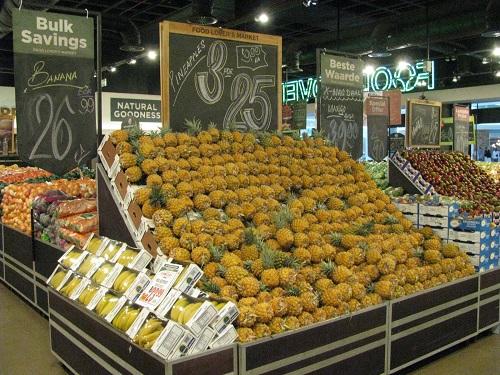 The price works out to about $0.63 per pineapple. Compare that the next time you go to CostCo or Sam’s Club.