Following the anti-tourist demonstrations in Majorca last week comes this new outburst of hatred for tourists — this time, sadly, in one of my favorite cities in the whole world: Amsterdam.

AMSTERDAM has launched a city centre crackdown against holidaymakers as anti-tourism riots gather pace across Europe.
Souvenir shops and bicycle hire, as well as fast food outlets boasting ice-creams, waffles and cheese, have now been blocked from opening in the Dutch city.
Officials say the shutdown is in a bid to stop “mass tourism” ruining Amsterdam’s “magnificent streets”.
It is the latest city to hit back at holidaymakers, with rioters and protesters intimidating tourists in Spain and Italy claiming they are ruining the country.
Mayor of Amsterdam, Kajsa Ollongren, said: “Tourists are very welcome, but we want to avoid mass tourism taking over our magnificent streets, canals and neighbourhoods.”
…
Ms Ollongren added: “We want to make sure the city centre remains attractive and liveable for the residents of Amsterdam.”

Let’s be honest, here. “Mass tourism” is a euphemism for “masses of drunken foreigners, especially Brits” because like Marbella and Ibiza, Amsterdam has become a destination — this time for bachelor parties — with ultra-cheap airfares and ferry fares making it less expensive, in many cases, for partygoers to travel there than to, say, hire a bus to take the party from Manchester to Margate. And with the high cost of hotel rooms in Amsterdam, the drunks don’t stay overnight — at least, not in hotel rooms: they simply drink themselves into a stupor, pass out in the streets and parks (Amsterdam has a very tolerant police force), and then catch the morning flight back to Britain, severely hungover (or still drunk). Here’s an example — and imagine if this happened at your favorite restaurant: 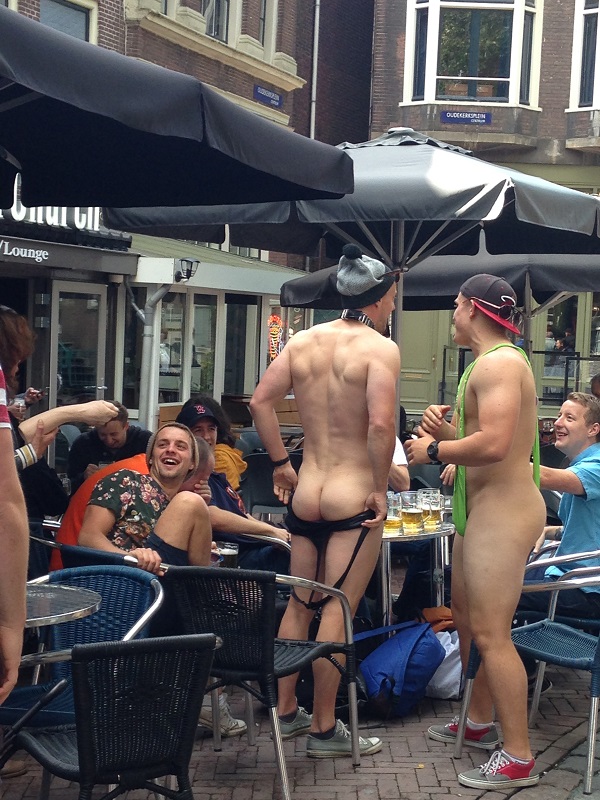 So I can appreciate the Amsterdam government’s point. Like the Balearic Islands, there has to be a point where you draw the line and say, as the mayor did: we’re going to put our residents first. And for those who don’t know this, Amsterdam, unlike tourist meccas such as Paris or London, is actually a tiny city: you can walk it flat in three days — I have — and pretty much see all the sights (unless you’re an art aficionado and spend hours in the Rijksmuseum, as I also have). So yes, it’s easy for the city of Amsterdam to be swamped and overwhelmed by tourists — more tourists than they’ve normally had to deal with in the past — and especially by tourists who act like the foul slobs above instead of like well-mannered guests.

And let’s be clear about this: if the wonderful, civilized and tolerant Dutch people are getting pissed off about these invasions, then things have really deteriorated.

I’m sad about this because in the past I’ve tried constantly to be the absolute antithesis of the above-mentioned unspeakables: I’m quiet, try to fit in by acting like a local, eat the local foods and in general, be a traveler more than a tourist. In other words, I’ve always been aware that I’m not a local, and there under sufferance. But thanks to the bad behavior of some revolting louts, it looks like I’m going to be caught in whatever net the various tourist cities erect to preserve their sanity.

I love to travel, and it pains me to think that one of my great pleasures in life is going to be restricted because of the baleful outcome of the coarsening of Western society.

Update: I forgot to include the official anthem of Amsterdam. (Okay, it isn’t; but it should be.)