So I went for my annual checkup last Wednesday, and caused the usual response from Dr. Whatsit: “Bugger off and stop wasting my time; I have sick people to look after.” (Oh, and I’d lost nearly ten pounds avoirdupois since my last check-up — most, I suspect, since I returned from Britishland and stopped consuming all those pies, fish & chips, Turkish Delight and Wadworth 6X.) But that’s not the topic of this post.

All the staff were wearing pink instead of their normal blue scrubs, so of course I had to ask the (stupid) question: “Why are you all wearing pink?” and met with the obvious response: “To raise awareness of breast cancer.”

FFS: is there a sentient human being living on this planet who isn’t aware of breast cancer?

The PGA golfers (male and female) wore those silly little lapel ribbons; the NFL players, back before they became unpatriotic little shits, also wore them; and the entire South African (male) cricket team wore all-pink uniforms during an international competition a couple years back. It looked like a Mary fucking Kay convention with cricket bats and helmets, not to mention gay. 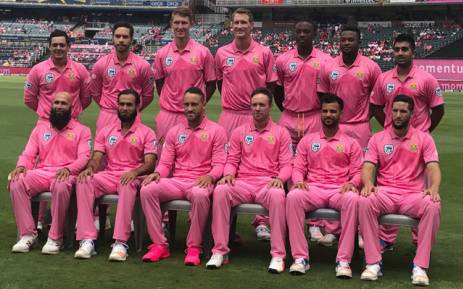 By now, I think that if you wanted to raise awareness of breast cancer, you’d have to charter a skywriting aircraft to fly over the jungles of Borneo or the Amazon, because those poor ignorant savages don’t play golf or watch football and probably don’t know the first thing about cricket (thus joining 99% of Americans, but that’s a topic for another time).

What Americans do know a great deal about is breast cancer — but basically, that awareness is worth exactly diddly, because as with so much doubleplus feel-goody bullshit, you can’t do anything with that information — other than to give money to the American Cancer Society, which already has more money than the average Central European nation, but which always seems to need more for… what, exactly? It’s not like the ACS owns cancer hospitals (like the Shriners); no, it seems as though the ACS needs more money to “make people aware” of a disease which everybody fucking knows about already. So basically, raising awareness really means “raising money”. I don’t have a problem with this, I just want people to be honest about their motives.

Oh, and get this: death rates from breast cancer are down 39% since 1989 (from the ACS website, no less). No doubt it’s because of increased awareness of cancer, not vastly improved medications and treatment. (And yes, I know the ACS funds research into the thing — I just think that they could fund even more if they stopped all these timewasting “awareness” drives.)

Cancer is a horrible, lousy, terrible disease. We all know this — some of us, like me, from first-hand or immediate second-hand experience of it — and honestly, I think we can stop with the childish pink ribbons and such because we run the risk of trivializing it.