As promised, I went to the range (DFW Gun Range, my all-time favorite) to test some “new” .22 ammo, to whit, the new budget Federal Range & Field variants.

So here are the two we’re going to be looking at: 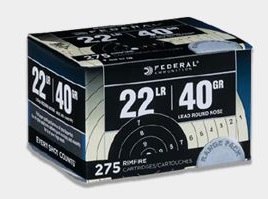 and its hollowpoint brother: 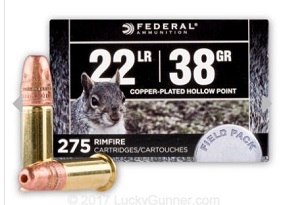 Federal claims that the two are ballistically identical, so that’s what we’re going to test, fired through  my trusty Marlin 880SQ — but on a benchrest, not a bipod:

Added, in response to a comment below: I always run a boresnake through the barrel between testing different brands; then I fire a couple of fouling shots into the backstop, and then continue with the test. It’s not a “cleaning” (in the sense of a full field-strip cleaning), but for me it suffices.

First, a quick test of the zero, using my go-to CCI Mini-Max 36-grain hollowpoints as a benchmark, in a 5-shot string (and point of aim for all rounds was the center of the diamond): 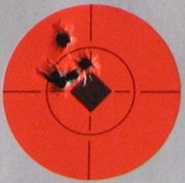 No problem, with a called flier. They shoot a tad high because they’re light 36-grain bullets. So a couple clicks down on the scope, and I was ready to start the test. First came the Federal 40-grain “Range” ammo: 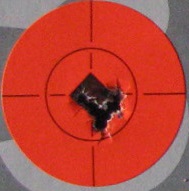 Ahem. That, dear Readers, is a 5-shot group, the very first time I’d ever shot this ammo. I’m pretty sure that someone else could do better than that, but not by much. 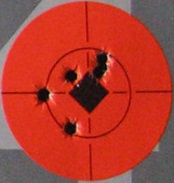 Honestly, I didn’t do the ammo justice because the guy in the next lane was shooting an AK with a muzzle brake, and the concussion / bright flash was causing me to jerk the trigger as I tried to fit the string in between his shots. Failure. So I waited till he was reloading, and tried the 38-gr rounds again: 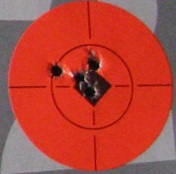 Much better, with the called flier on the left. Yes, as I suspected, the lighter 38gr Field hollowpoint bullets do strike a teeny bit higher than the 40-gr Range solids, but not by much, and it’s a good, solid group nevertheless.

I shot both ammo types a dozen or so more times each (without any significant differences from the initial groups), and I can honestly say that I think the Federal Range 40gr lead roundnose ammo is the bee’s knees — and its low price makes it a definite entry into the “plink all day” category. The Field 38gr copper hollowpoints? I’m going to hold off for a while and maybe do a little more testing — maybe compare it to other .22 hollowpoint ammo. It doesn’t seem to offer as tight a group, but as I said, I’m going to give it another session to make sure.

Finally, let me offer the usual caveats: these results came from my rifle, my scope and my level of shooting skill. Your results may differ — and in fact, they probably will, so it’s up to you. Rimfire guns are also notoriously picky as to their “favorite” ammo, and what works beautifully in one rifle will be awful in another. The Marlin 880SQ seems to love the Federal Range 40gr LRN ammo — and as proof I’ll show you another target result, using Winchester Super-X 40gr LRN this time: 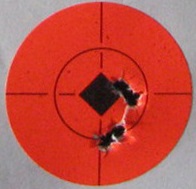 I have a jillion rounds of the Super-X stuff because I got a honking deal on it about a decade ago and bought accordingly. I normally use this ammo exclusively in my Taurus pump-action because that’s what I plink with, but the grouping above is typical for this ammo in my guns: quite some variation between cartridges from the same box (which didn’t happen with either of the Range & Field types). A variation doesn’t matter when I’m looking for minute-of-Coke-can, but it does if I’m doing some serious shooting.

Anyway: my conclusion is that this new budget ammo from Federal performs much better than a budget cartridge can be expected to. Give it a shot for yourselves.

Up next: Federal Automatch .22, which should arrive in the next few days. Watch this space.

*Reminder: I get no kickbacks from any ammo manufacturer whatsoever for these tests. I perform them on an ad hoc basis, according to my whim or choice. Mostly, I buy the ammo for myself; but if anyone wants me to test ammo and sends me a couple boxes, I’ll do it gladly with the proviso that I will be impartial and outspoken. If I think the ammo sucks, I’ll say so, using those words; and if it’s excellent, I’ll say that too.