From this blog comes the following piece of idiocy from the NRA’s Carry Guard program:

*NOTE: NRA Carry Guard Level One is designed for training with a semi-automatic handgun (Glock 19/17, Sig P226/P228 or equivalent). We will not allow revolvers or 1911s as your primary firearm in this class. [my emphasis]

Guess I won’t bother taking that class, then. Or maybe I will — only I’ll bring a Browning High Power as my primary, and my 1911 as a backup.

For those who are unaware of the irony (and there may be one or two), I should point out that both the Colt Government 1911A1 (1911) and the Browning High Power (BHP) were designed by the same man, John Moses Browning, and are functionally identical but for chambering (.45 ACP vs. 9mm Para respectively), magazine capacity (7-10 for the 1911, 12-15 for the BHP) and disassembly routine (which is irrelevant in this case). Other than that, both are single-action semi-automatic handguns, and I love both of them almost equally (because BHP = 9mm, a marginal self-defense cartridge). 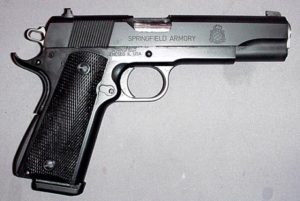 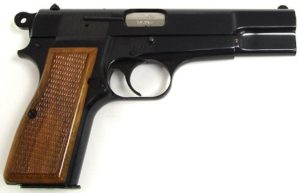 I have no idea what the NRA was thinking (or if they were thinking at all), but the 1911 is one of America’s favorite carry pieces and to exclude this wonderful gun from a “carry” class is doing a huge disservice to a large number of gun owners.

On second thoughts, I won’t be taking the stupid class at all, because no doubt the NRA weasels would take issue with the way I carry my 1911 anyway.

But that’s a topic for another time, when I discuss handgun carry. Watch this space.