I have talked about this phenomenon before, but this latest Mrs. Robinson event (please look at it) has triggered a few further thoughts on the topic.

Let’s leave aside that the 38-year-old woman is not bad for an old broad (from a teenage boy’s perspective), with blue eyes and a sorta trailer-park-Elizabeth-Taylor look about her. 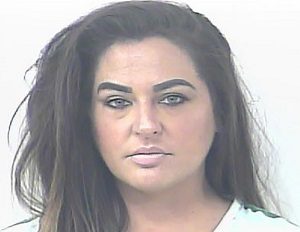 In my foul yoot, I might easily have availed myself of her offerings (certainly the sex and the booze part, but not the cash and definitely not the weed). What I would have done differently is kept my mouth shut. Now, the report on the affair [sic] is severely lacking in details, but this “fifteen-year-old” sounds like quite the little weasel, ratting the woman out and taking money from her bank account.

I’m going to ignore the fact that the woman is quite clearly demented and/or retarded, as witnessed by her stupid behavior, and I’ve already confessed to my ignorance as to why older women are doing this stuff in the first place. It is abundantly clear, however, that this youth took massive advantage of her. If I were to put a timeline on the various activities, my guess is that she invited him in for a little nookie — and maybe a beer to help him along — and then he quite possibly blackmailed her into all the other stuff: more booze, weed and visits to the ATM — all aided by the fact that she’d already committed a felony by having had sex with an underage boy. And the whole sorry thing came to light either because he bragged about his “conquest” (as teenage boys will do because, duh, teenage boys), or else he was busted with weed in his possession and howled, “The old lady gave it to me while we were having sex!” or some such excuse. Whatever.

Like I’ve said, I’m guessing because I have no proof of any of this and I don’t know what actually happened; but you have to admit, it’s certainly a plausible situation.

What makes it all the more tragic is that if the above scenario is close to the truth, then the woman fell foul of a kid who was, shall we say, mature beyond his years, and who could take advantage of her to a much greater degree than she ever took of him. Had this happened in, say, the 1950s or around that era, I’d be the first to look severely at the older woman. Nowadays, however, boys are a lot more venal and worldly, and more likely to be total shits about something like this.

I’m not excusing her behavior, by the way, nor am I “blaming the victim”; but you have to admit, the world has changed since statutory rape laws were enacted and not, I would suggest, for the better.