When I was at university in South Africa back in the early 1970s, our group of friends developed a game known as “Poor Man’s Monopoly” using a regular Monopoly game, but wherein each contestant started off with no money whatsoever, collected only $20 (not $200) when passing GO, and the winner was the the first player to own any property at all. (Let me tell you, those little brown properties next to GO became much sought after.) And of course, the “Chance” cards which casually allowed a player to collect $5 from each of the others could cause a fistfight. The only “Chance” or “Community Chest” cards we stripped out were the ones requiring income tax payments — because, obviously, no one earned enough to pay taxes and we didn’t want to see our friends committing suicide. The games took forever to spit out a winner — kinda like life itself, really — and were played in an atmosphere of grim desperation — once again, kinda like real life.

Which brings us to this wonderful concept.

According to Black Lives Matter (and their White liberal supporters), this is their life, according to the White Man’s Monopoly rules: 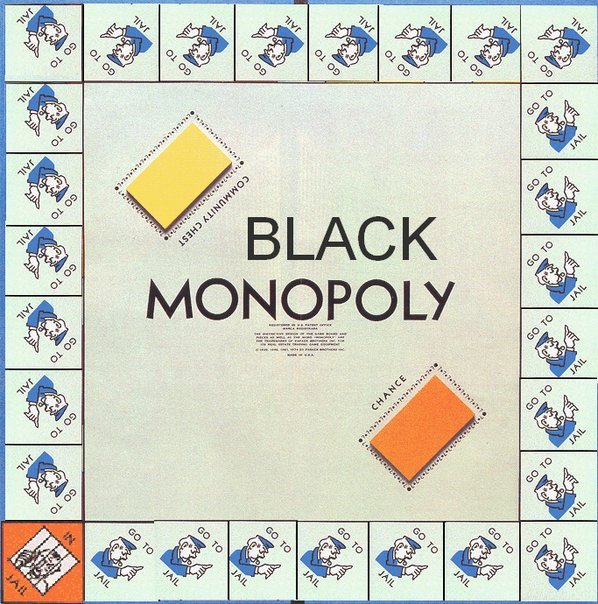 Suggestions for the “Chance” and “Community Chest” cards in Comments, please. As always here on my back porch, political correctness and trigger warnings can be safely ignored as long as it’s funny.

By the way: I didn’t spell “Monopoly” with the little circled R after the y because a.) I don’t know how to create it in WordPress and b.) fuck you, Parker Brothers’ lawyers or whoever.