Over the years, many people have written to me asking what I would consider the ideal home-defense handgun. (And yes: I know that a handgun is what you use to fight your way to a shotgun. But sometimes your shotgun in locked away in your safe. So let’s just stick with the handgun, for the moment.)

Now, let’s understand what I mean by “home defense”. I don’t mean that your house is under siege by Al-Qa’eda fanatics or even the local neighborhood homeowners’ committee (California residents will know exactly what I mean).

No, what I mean is that you’re fast asleep, when suddenly you wake up and realize there’s mischief afoot, inside your house.

Let me be perfectly clear about what I’m going to say next.

Or you can just do it the easy way, and use a double-action revolver. Nothing to think about, nothing to operate except the trigger (like that wonderful line: Smith & Wesson — the original “point and click” interface).

Ultimately, of course, you’re going to do what you want to do, with the gun that feels the most “comfortable” to you — i.e. the gun that you feel is most likely to get the job done.

And that’s fine. Just be aware of the potential drawbacks and advantages of all the options.

After all the hundreds of hours and many thousands of rounds I’ve spent with my beloved 1911 pistols, my bedside gun is a double-action .357 Magnum revolver, chambered with Federal Hydra-Shok 125gr. JHP (jacketed hollowpoints).

Ultimately, as I’ve said before, it all depends what you’re comfortable with—and if you’d rather park your Glock 17 next to the bed, be my guest. Just be sure when you’re half-awake and fumbling for the thing that you don’t hit the magazine release by mistake (it’s been known to happen, more than once)—and that can happen with any semi-auto pistol.

A revolver is like a fork: you pick it up, and it works. Here’s my old S&W Model 65, just to illustrate the concept: 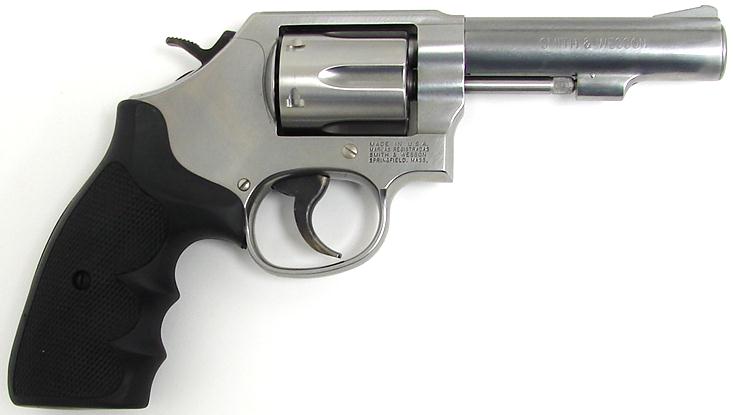 Now for some other thoughts:

I talked a little about ammo earlier, and I need to offer some advice to people who own guns in GFW states like Massachusetts, California or New York.

If you whack a goblin in your home in a Righteous Shooting, there’s always a chance that some asshat prosecutor (or lawyer for the dead goblin) will go after you because you used “killer” ammo.

Yes, I know, all ammo is supposed to kill, but there’s no arguing about this when you’ve just used a full cylinder of Black Talons you picked up at that gun show in Alabama. If that happens, you’ll be painted as a “bloodthirsty vigilante killer” quicker than Tom Sawyer’s fence.

Here’s a tip: Use the same type of bullets as your local police force does. If you use “police” cartridges, then no one can paint you as a vicious killer.

Ask one of your neighborhood cops what kind of bullet (not just caliber) his department uses. Mostly, they’re going to use CCI/Speer Gold Dot, Winchester PDX or Silvertips, Remington Golden Saber or Federal Hydra-Shok. The caliber may vary, but the bullet type is probably going to be one of those brands. Generally, the same bullet type will be available in your caliber.

(Ditto shotgun shells, by the way—you may think it’s a really cool idea to BBQ the goblin with one of those “Dragon’s Breath” rounds, or turn him into a pincushion with a “flechette” shell, but, regrettably, it’s not a good choice. Use “game” loads: you’ll be a “sportsman”, not Rambo, and he’ll be just as dead.)

And one last caveat for everyone: whatever you’ve got in your bedside drawer, make sure that your kids or grandkids can’t get hold of it.

How you arrange that is up to you.

My kids, even when small, knew better than to go into my bedside drawer — but even so, I used to lock my bedside gun away during the day anyway, and take it out again at night. Did I ever forget to do that? Not once. After a while, it becomes a ritual, like cleaning your teeth in the morning and at night.

Trigger locks are okay, I guess, if you don’t want to mess with locking the gun away — just remember to lock it every morning, and unlock it every night. That I have forgotten to do (unlock it, I mean) — and it’s no fun to be fumbling with a trigger lock when all hell is breaking loose in your house, which is why I prefer to lock it away during the daytime.

I can’t stress this enough. A gun is a lethal object in a kid’s hands. A dozen or so kids, and their parents, find that out every year, and I just want to smash my head against the wall every time I hear about another incidence of that, because it’s so unnecessary.

And when the kids get older, teach them about guns and about gun safety. The incidence of accidental shooting deaths among kids who have been trained in gun safety is almost zero. Follow the stats, folks.

But most importantly of all, if your kid have friends over to play, lock the damn gun away. You may be able to trust your kid, but a group of kids has the collective responsibility of a treeful of drunken chimpanzees, and that will include yours.

Don’t give yourself a broken heart by your carelessness — and don’t give the gun-fearing wussies more ammo to use against other gun owners, either.