From The Englishman comes news of this atrocity:

A development of luxury homes in Cambridge has been daubed with graffiti – written in Latin, of course.
Vandals spray-painted the new five-bedroom river-front houses with the words Locus in Domos Loci Populum. 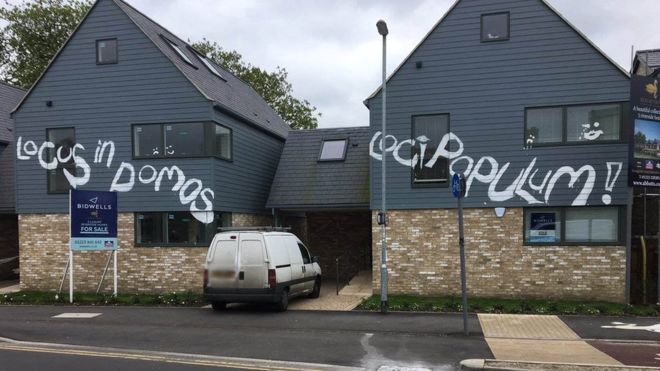 Locals have said the messages, which appear to be a protest against the development, could “only happen” in the university city.
The homes, in Water Street, Chesterton, priced from £1.25m are on the site of an old pub.
Cambridge University Professor of Classics, Mary Beard, said: “This is a bit hard to translate, but I think what they’re trying to say is that a lovely place has been turned into houses.”

Oh, good grief, it’s not hard to translate at all. What the graffiti actually means is “Private homes from public land.”  (What makes her mis-translation worse is that it’s a classical — i.e. republican Roman — sentence construction, and not Byzantine or European Medieval, so it should be well within her wheelhouse.)

Sometimes I fear for the fate of Western culture, when graffiti-protesters know more about Latin than do university professors. Or when I understand Latin better than Mary Beard, for that matter. They must have had a special deal on Classics degrees at Tesco the day she got hers.

Update: I got an email from a Brit Reader who says that the real atrocity is labeling those houses as “luxury”. I agree.