I can’t afford a new shotgun, or even a decent second-hand one, but I am going to need one for High Bird Shooting (and Missing) later in in the year, so I’ve been looking in more or less a dilettante fashion to see if I can get one that is acceptable but which does not require the sacrifice of a firstborn child. I have a shotgun already, of course, but it’s an old, ugly thing of uncertain provenance and even more uncertain performance — and it’s in the much-derided 16-gauge chambering, which would cause untold me embarrassment if uncased on Lord Whatsit’s estate (for ’tis there where I will be shooting in early November). Hence my problem. Even worse is that, current no-name El Cheapo shotgun aside, I do have some fairly rigorous standards about shotguns I want to shoot, let alone own.

And here are the details of the features I’d like:

1.) Side-by-side barrels, at least 29” long. Longtime Readers will remember that as an old-fashioned man, my motto about shotgun barrels is that they should be placed side by side, like a man and his dog, and not over and under like a man and his mistress.

2.) Concealed hammers. I’m not that old-fashioned.

3.) Boxlock action. Okay, I am that old-fashioned. I just like the looks of the boxlock. (Here’s a fine summary of the differences between boxlock and sidelock actions. I should note that with modern steel, a boxlock action is every bit as strong as a sidelock, and the boxlock shotgun weighs considerably less than a sidelock.)

4.) Double triggers. I prefer knowing that when I pull the rear trigger, the left barrel will discharge first. This is especially important if some time has elapsed since firing the first shot, or if one has to replace a dud cartridge.
Here’s a pic of all my desired features so far:

5.) Full choke in the left barrel, Improved/Modified in the right. (“Full” and “Three-quarter”, for my Brit readers.)

6.) Chambering: 20ga. I know, I know… it’s not the mighty 12ga, but Mr. Free Market shoots the 20ga (for medical reasons), and I’d far prefer to mooch ammo off him Over There, rather than going through the schlep of carrying 500+ U.S.-bought shells over The Pond into Britishland.

7.) Little or no engraving on the receiver/barrels or checkering on the stock. Actually, I’d prefer no carving at all. I love the feel of smooth steel and smooth wood, and my hands don’t perspire, so there’s no danger of the stock “slipping” in my grasp. And speaking of stocks, I want an English-style “splinter” (small, tapered) fore end.

…and a “straight” stock (no pistol grip), which is also sometimes called an “English”-style stock: 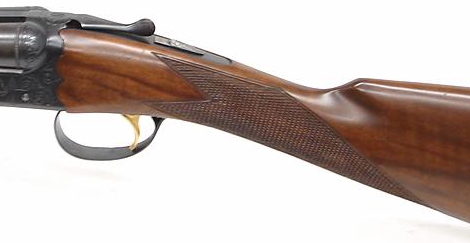 8.) Safety: Not automatic. An “auto safety” on a shotgun typically engages [duh] automatically when you open the action for loading. Thank you, but I’m fully capable of deciding for myself when I want the safety engaged or not. When I load a shotgun, I want to shoot something, and when I close the action, I want to be ready to go.

9.) Ejectors: Adjustable. There are times when you don’t care where the empties go, and you have to reload quickly, and on those occasions a “full-eject” is desirable. Then there are times when you need to remove the fired cartridges manually, and put them away in a bag or something, so you don’t have to go grubbing around in the dirt for the past mile you’ve walked, looking for the spent cases. Also, if you haven’t fired and need to extract the live cartridges, it’s far better not to have them drop into the mud.

Not that I’m picky, or anything.

Sadly, there are few such animals on the market at the moment, so I’m going to be searching for some time — especially considering my parlous financial state, which will require some kind of bargain before I purchase one. Unfortunately, most shotguns of such beauty and features are seldom “on sale” because of their relative scarcity and high demand (see here for one such “bargain”, or here for another ), so it’s going to take me a while, and I may have to sell if not the firstborn, then at least the Forgotten Middle Child Whom Nobody Loves.

This being poor thing really bites.