And lo did the Combatte Controller and his fair bryde venture unto the castle of the Physician, where they mette with the man they call Evil Kim. After supping upon the flesh of dead bullock did the carousing beginne, with the drinkynge of much ale and strong spirits. And there was raucous laughter, and loud conversation, and foulle language, and fondling of weaponry large and small, more loud laughter and carousing, and did I mention drinkynge? 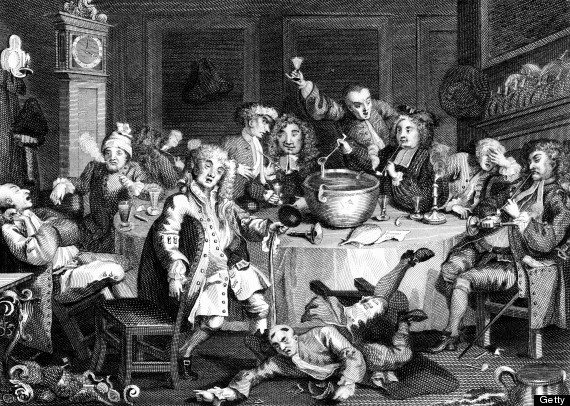 By the light of the dawn did Evil Kim awake, with throbbynge head from the liqueur and sore stomach from all the laughter, because he had to penne this blogge, and lo did the bright rays of the Sunne afflict his eyes. In vain did he plead with the others, whose bodies are clearly more accustomed to such debaucherie, to keepe their voices down lest his pore head explode. And loudly did they laugh at Evil Kim’s predicament, callynge him ugly names such as Olde Fartte and worse (which I dare not mentionne here lest the Ladies reading this sorry tale be offended). Even the Physician, who should knowe better, did mock the ailments of Evil Kim and gave him not of his potions to ease the pain, and did cackle upon hearing the groans of sufferynge, the Foul Bastard (for such did Evil Kim call him).

Whereupon did the groaning elder member of the group repair unto his bedde until such Tyme would pass that the hobgoblins would cease their clogge dance in his head, or merciful Death arrive to claim his ravaged body. Should the first come to pass, and not the last, will Evil Kim (now called Nice Kim) penne further tales for his Loyal Readers, but ’twill occur most lykely in the morn.