I don’t mean that literally, of course; I’m talking about moving from a 3,000 sq. ft. house into a 650 sq. ft. apartment, and what that entails with your stuff.

The Mrs. and I were a little magpie-ish, and I think it was because as we were both once self-employed, we watched the pennies carefully when it came to office- and business-related purchases. Both of us hated having to buy office stuff — overhead and operating costs were a constant niggle — but even worse was having to buy the same thing again because we’d tossed the earlier one prematurely. So we ended up with old desktop PCs, old laptops and an astonishing number of monitor screens (I think there were eight, the last time I looked). And having a large garage as a store room just made that worse.

And that’s fine; it’s all become junk now, and I have no problem taking it all to Goodwill. (Did you know that Goodwill is listed as a primary “green” disposer of old computer hardware? I had no idea.)

Speaking of garages, we also had an astonishing number of tools (mostly woodworking, because that’s what I know how to do). But I wasn’t the cause of the Ace Hardware catalog in the garage: it was The Mrs. who, once she’d discovered that I knew how to use those things, insisted that I buy them and show her how to use them; then, having mastered them to her satisfaction, she’d elbow me out of the way and I’d never have to touch them again. Jigsaws, scroll saws, miter saws, drill presses, belt sanders, finishing sanders, routers, planers, nail guns — you name the tool, she used it constantly. She nearly burned out the drill press.

They’re all gone, now; I traded them all with a guy who’s going to put a new floor in the master bathroom in return, and I gave them away without a second thought, because I know I’m never going to use them again, nor will I ever have enough space to do so. There’s no emotion because they’re just tools.

What I hate — absolutely hate — is getting rid of books. As I watch the Son& Heir and Canucki-Girlfriend take the books down off the shelves, I have to make the dreaded Keep / Discard decision for each one, and I have to tell you, for a man whose entire life has revolved around books, it’s like losing knowledge, piece by bloody piece.

(I’ve never bought into e-books, by the way. I tried a Kindle, but it might as well been kindling for all the appeal it had to me. Here’s the reason why: my eyesight is failing [Old Fart Problem #4], which means I have to increase the font size to see the words properly. Problem: I read at about 2,000 words per minute (always have), which means that I’d get a blister on my thumb from hitting the “Next Page” button on a Kindle. The Mrs. even complained about the noise of the constant rapid-fire clicking.)

And that’s the problem, right there: I love the feel of a book in my hands. I love the ability to flip backwards to re-read a passage that turned out to be important later on. I love the fact that once I own a book, it can’t be taken away from me electronically by some algorithm which decides that I’ve had the content “long enough” (as though there’s an expiration date on ownership).

Yet now those same books are being taken away from me, not by an algorithm but by real estate — or the lack thereof — and maybe it’s just because I’m in mourning anyway, but the loss of my books is causing me unbelievable heartache. The more popular ones are going to Half Price Books, the gutless gun-haters, because I need the money. The “good” books (in my opinion), the history books, the philosophy books, the political books — all those are going to Goodwill and Salvation Army because I want them to reach people who really need them.

The Son&Heir estimated that there were about 5,000 books on the various bookshelves scattered around the house, and I’ve had to say good-bye to all but maybe a hundred or so. For a book-lover like me, it’s Sophie’s Choice, times thousands. Here’s the main bookshelf in the library — yes, it was called the library, because that’s what it was — and all the books you see are hardbacks. All but about twenty are gone. 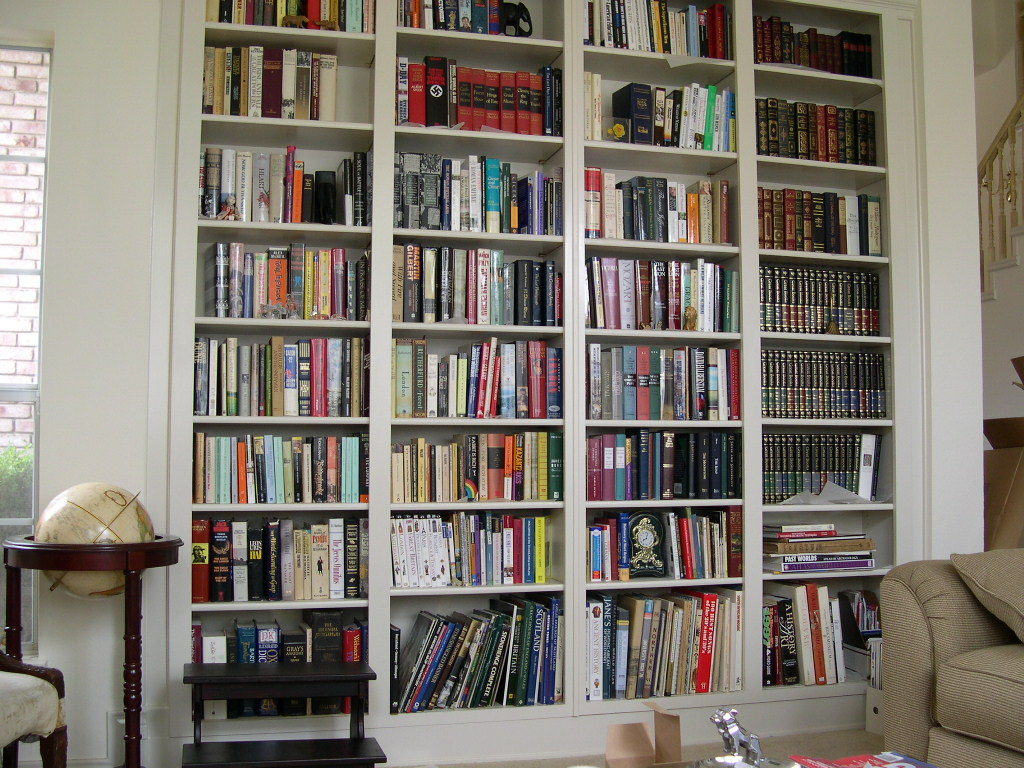 And the same applies to the other eight bookcases located in other rooms and the upstairs den. Two are larger than this one.

And just let some wise-ass say that this is a First World Problem, and I’ll come over to his fucking house and burn it down. With him inside.