“The vast majority of humans are about as valuable as individual atoms of hydrogen, a lump of coal, or the unearthed and unrefined ore of iron. They are worthless, they are pointless, they will never amount to or achieve much of anything. Out of the estimated 150 billion humans who have lived and died on this planet, a mere 10,000 are the ones who made history and set forth humanity on the path it is today.”

Diamonds, Steel and Stars (the article from which the above came) is definitely worth a read.  In fact, it should be mandatory reading for every adolescent — even if only 0.00005% of them actually do what the article suggests.

Okay, so we’re all-too familiar (and depressingly so) with the scenario of a woman having sex with her daughter’s boyfriend, yes?

How about having sex with BOTH your daughters’ boyfriends?

AND the boys were aged 14 and 15?  (We’ll leave aside the question, for the moment, as to why the daughters, presumably the same age or younger than the boys, were allowed to have  boyfriends in the first place.)

And because this was California, Mommie Dearest isn’t going to jail for statutory rape.  (I know, swap the sexes for maximum outrage.)

I haven’t seen this much wrongness in one story since the Obama Administration.

I stumbled across this “Eeeeevil Peoples Alert!!!” at the poxy NYT Magazine (and I’ve linked to it because it is unintentionally hilarious.  Go and read the thing first, then come back;  I’ll wait. END_OF_DOCUMENT_TOKEN_TO_BE_REPLACED

Wherein I summarize the news of the recent past.  (Warning:  I’m in an irreverent mood today…)

2) Gang-rape victim reports crime, gets raped again by a cop — guess it just wasn’t her day, was it?  (Come on:  it happened in Pakistan, that bastion of civilization where all women are revered.)

3) Dallas gang beats up trannie — guess the race of the attackers… nope, ’twasn’t Muzzies; not this time, anyway.

4) Notre Dame Cathedral destroyed by fire — I guess the BVM was busy doing something else at the time, huh?  (I warned ya.)

5) Rich farts in CT can’t sell their houses at inflated prices — ‘cos all the would-be buyers have fled to low-tax states already. 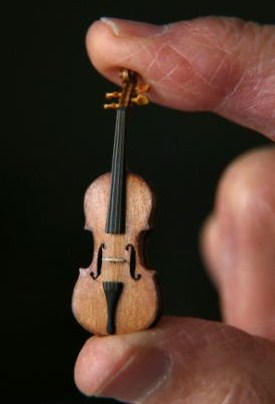 “Every totalitarian power cult needs a vocabulary of vituperation—some way to talk about the enemies of the people: those wreckers, saboteurs, and counter-revolutionaries who are always trying to slow or divert society’s righteous march forward to a radiant future.”

Today is April 15th, which the Feddle Gummint refers to as “Tax Deadline Day”, but which Real Murkins refer to as “Buy-A-Gun Day” (hence the title of this post).

I haven’t made up my mind yet, but it’ll be something small and concealable, with no paper trail.  (And therefore will not appear on these pages, sorry.)  I invite my Readers Of Similar Persuasion to do the same.

Feel free, however, to be like the guy who embraced the concept fully*: 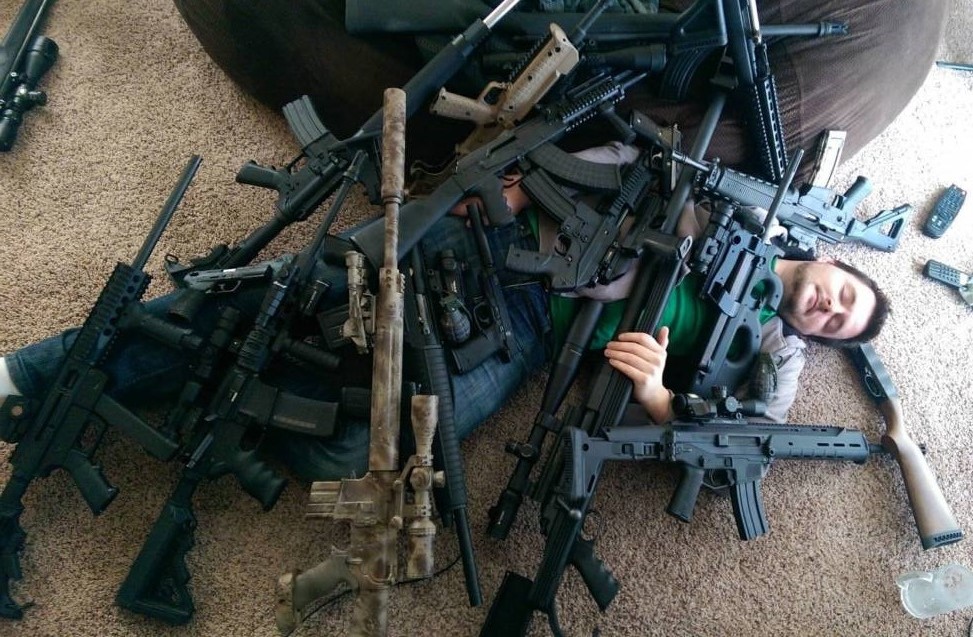 But if you feel that you have enough guns (okay, you can all stop laughing now), feel free to lay in some canned goods instead: 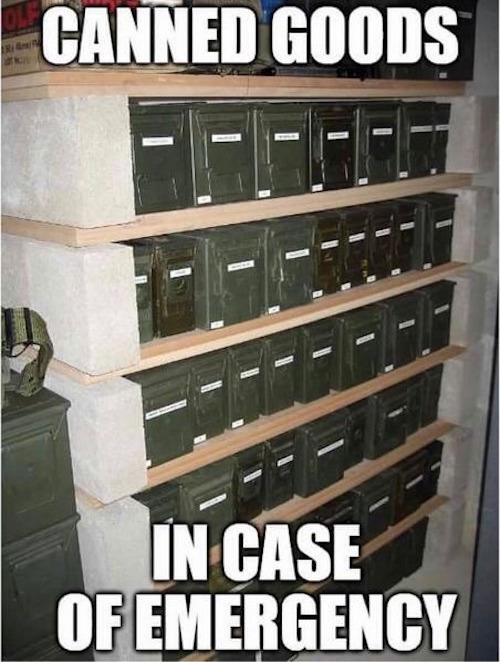 (That’s not Ye Olde Ammoe Locquer, by the way, but it’s not far off.)

*My only quibble:  way  too much plastic in there.