Also from my Disqus history (and yes, this actually happened to me):

“I’d never heard of the term “nooner” until I came to the U.S. back in the mid-1980s. I thought it meant a lunchtime cocktail. So when I suggested to a couple of the ladies at the office that we nip out for a quick nooner… HR was not impressed.”

I was chatting to a friend about dealing with the loss of one’s wife, when he made a rather startling admission. Now before I go any further, I should point out that he’s been more-or-less happily married to his Mrs. for well over two dozen years, and says he’s never been unfaithful to her (and I believe him, because… well, because I know him).

“If something horrible were to happen to _____,” he said, “and I wanted female companionship after I came out of mourning, there’s no way I would ever have any kind of long-term relationship again.”

“I’d rent ’em,” came the calm reply. “With the way women behave nowadays, I doubt whether there’s a single one who’s worth the trouble.”

Which leads me to the next point. Apparently, some Australian prostitute [Redundancy Alert] recently came out into the open about her chosen profession, and gave a list of her absolute no-nos when it came to things she’d do for a client. The most amusing one was: “No Irish men… for obvious reasons.”

You have to know how badly she views Irish men, when almost all her clients would be Australian. Of course, she’s Australian too, which means she’s dreadful. Even my friend wouldn’t touch her with a long stick.

Lest I be accused of being a hater or Strine-phobic, here’s a pic of an Australian wedding party: 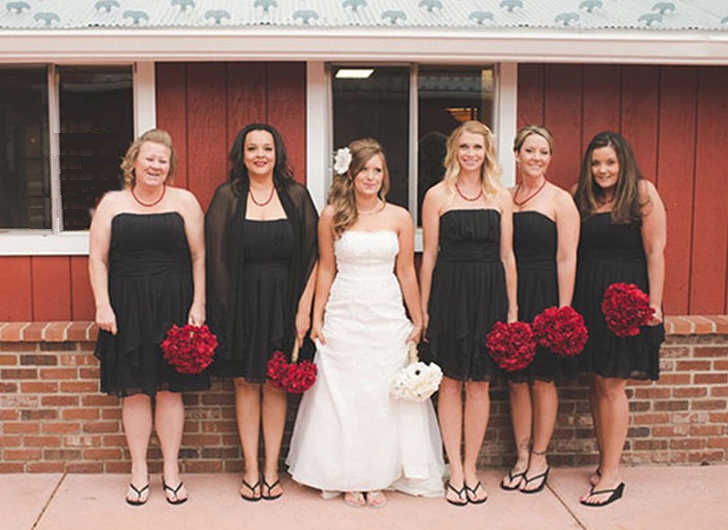 My friend’s comment: “Good grief. No wonder Australian men drink so much.”

In the Comments to Random Partners below, Reader Egregious Charles takes issue with my statement about treating woman as the gentler sex.

Women have never been the gentler sex; notice how tribal people turn over captives to the women when they’re to be tortured, as in the Congo and Native American tribes in the Old West? There’s only one way men are less gentle, and that’s to other men when it’s on behalf of women (or to show off for them).

Well, yes. Except that I’m sorry, but I refuse to use the rituals of primitive peoples (e.g. the Congo and Native American tribes, also Islam) as an example for anything other than something to be avoided. Western civilization has improved the lot of both men and women immeasurably by improving on the customs and mores of primitive peoples, while holding on to those aspects that actually improve society. This includes institutions like marriage (which formalizes the family structure), and treatment of the weaker members of society (e.g. forbidding that women to be stoned to death for adultery, genital mutilation to “curb” the female sex drive, etc.)

I would suggest that much of today’s societal woes in the West have come about because we’ve taken a step backwards — undermining the social institutions and mores upon which Western civilization was built, to where we arrive at revolting outcomes such as Tinder.

Most men don’t use Tinder.

Of course not, and nor do most women. But countless millions do, according to the app’s download statistics, and my commentary is based on that fact. I don’t ever buy into the “NAWALT” (not all women are like that) or, on this case, “NAMALT”, because the fact of the matter is that when something becomes widespread, especially in a certain segment of society (e.g. Millennials, in this case), it’s worthy of commentary.

Men aren’t generally speaking assholes except to each other, and I’m sorry but this is just an example of posturing to look better than the other men.

To take your points in order: I would respectfully suggest that the coarsening of society has enabled men to go back to treating women like shit. Here’s what people seem to forget. The laws which make divorce so advantageous for women in terms of child support and property division didn’t appear out of the blue: they were a reaction to the fact that men often deserted their wives and refused to live up to their responsibilities as parents. Of course, not all men behaved that way towards their wives; but enough of them did to make the passage of such laws possible. That women have turned around and used divorce against men is terrible, but that’s just an example of laws often having good intentions but unintended consequences. (This is true of most laws, by the way, but that’s a topic for another time.)

So your comment that “Men aren’t generally speaking assholes except to each other” is factually incorrect: men are assholes quite promiscuously, whether to each other or to women. We can talk all day about why this is or is not the case, or who’s to blame and so on, but you’ve committed an egregious [sic] faux pas on this website, which is to take an obviously-flippant comment seriously.

My position on women behaving like assholes, by the way, is well documented — a reading of my essay, “The Pussification of the Western Male“* might be salutary — and yes, I am (and was then) perfectly aware that Not All Women Are Like That (the latter being tiresomely pointed out to me in the thousands of angry emails I received after the publication of said screed).

As for “posturing to look better than the other men“, you will find, as you read more of my writings, that I don’t ever “posture” or, to use the current en vogue expression, “virtue-signal” in any way. I state my position on matters quite clearly (and often bluntly), and how people take those positions is a matter of utter indifference to me. To restate that (because it’s quite important, in visiting this website): I once stated in an earlier time that you may agree with me, and stay; or disagree with me, and move on: either choice is irrelevant to me, because I really don’t care about other people’s opinion of me, one way or the other. I live my life in splendid isolation [sic] from the opinions of others. If you understand nothing else about me, you need to understand this.

So if you excused me of “posturing” out of ignorance of who I am, that’s okay; if you used it as a debating trick or insult, it didn’t work.

By the way, Readers can expect a lot more posts on topics like Tinder, the male backlash against modern feminism in the PUA (pickup artist) and the  MGTOW (Men Going Their Own Way) movements, and so on. I find the whole thing fascinating, and visiting the various websites dedicated to the above has been at times hilarious and at others, deeply disturbing. I once predicted the MGTOW action, but I did not foresee the PUA activity or the industry is generated. Watch this space.

*At some point, Tech Support v.2 and I will figure out how to import various of my earlier essays (Pussification, Let Africa Sink, The Gun Thing etc.) from the old websites and post links somewhere on the sidebar of this site. It just won’t be today.

So during my absence from this here Intarwebz thingy, apparently there came into being an application (“app”) called “Tinder”, which allows men and women in close proximity to each other to “hook up” (i.e. have casual sex — quit laughing, I’m trying to keep up here). “Swipe Left” (on one’s phone screen) means “get lost” and “Swipe Right” means “I allow you access to my genitalia”. (I’m using as many euphemisms as I can dream up, but I’m running out pretty quickly.)

Back in the Olde Tymes, right after we discovered fire (or maybe it was the wheel, I forget), the equivalent to this was walking up to your object of desire and saying the immortal words, “Your place or mine?” without so much as an introduction, and was almost always uttered by a man to a woman. Needless to say, this approach was generally met with scorn, horror and/or a slap in the face — unless the speaker was a Bad Boy, a Handsome Man, a Wealthy Man,a Celebrity or some other type which seems to make women lose their modesty, loosen their panty-elastic and turn their legs into margarine.

Now, with Tinder, the approachee can look at the photo of the approacher and make a snap judgement as to whether a more intimate encounter can occur (swipe right) or not (swipe left). As this decision is made based purely on a photograph, the outcome can often be dire, and there have been many right-swiping stories with tragic outcomes. I imagine that Jack The Ripper would have wept tears of joy had he had Tinder available in late-Victorian London, for example.

Even as little as a few years ago, I would have been shocked / disgusted / appalled at this situation, but now I look on the whole thing with a more jaundiced eye. If there is a way to fuck your life up — in this case, exposing yourself to venereal disease, danger and worse for a quick, empty thrill — then people are going to find it. That this process can now be facilitated with the aid of technology occasions from me no more than a shrug. It’s just the same as “Your place or mine?” but with less intimacy (in that the approacher / approachee are never actually close to each other until the right-swiping outcome), and there’s also less chance of hurt feelings and a sore cheek. In other words, it’s a perfect Millennial-snowflake encounter.

I can understand why a man would use Tinder, because generally speaking, we’re assholes looking for an easy lay. Why any woman would use Tinder is quite beyond me;  but then again, as any fule kno, I am rather old-fashioned about this kind of thing in that I actually prefer a little romance before penetration, as it were, and I persist in thinking that women are the gentler sex, despite all evidence to the contrary in today’s world.

So flirting has been replaced by an impersonal mechanism. Whatever. Just as I prefer my battered old 1911 to a modern gun loaded with plastic doodads, I prefer old-fashioned romance to soulless coupling.  To put it in artistic terms: 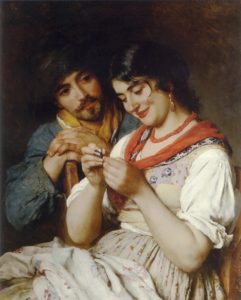 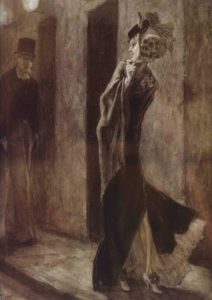 Your opinion may vary, but I’m not really interested in hearing it.

This was at Central Market in Plano. The guy was in his early forties, the woman maybe late thirties. Clearly, they knew each other but hadn’t seen each other for a long time.

I love it when a guy knows how to flirt.