Ah, once again we see the joys of immigration and cultural assimilation:

An Afghan migrant who raped and sexually assaulted multiple young boys and girls defended his vile abuse as ‘normal’ cultural practice in his home country.

He did get 15 years for his “first” offense (raping a 12-year-old boy) and is due to get his pee-pee whacked for a slew of other such atrocities.  Even for the French, this appears to be too much.

I await the wails of the cultural apologists, with interest.

As for the “melting pot” issue so beloved of the open border crowd, allow me to suggest that this melting pot is what I would have in mind for offenders such as the above: 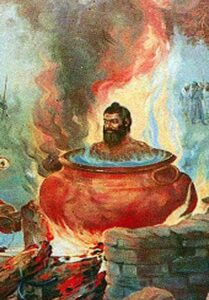 …although no doubt some people would think that this is A Step Too Far, Kim.