Seems as though the air travel industry is having tough times nowadays.

On Thursday, JetBlue and other carriers laughably claimed that they were canceling the flights because of weather. This was garbage, as the weather where we were (NY) was perfect. Why would they do this? If they can claim it was the weather, they don’t have to pay for your meals, your hotel—anything. (Yes, there were some scattered thunderstorms across the nation. Hardly enough to cancel 10,000 flights.)

What?  You mean airlines will lie to you to save money?  (In other news, politicians lie and water is wet.)   And:

How does this keep happening in America, over and over? (By the way, things were no less of a disaster over Memorial Day weekend.)

Mostly it’s due to staffing shortages: pilots, crew, and air control. This is partly due to the fact that the Biden Administration mandated vaccines for pilots and other personnel, many of whom either quit or were fired for refusing. Guess what, Joe; you need pilots to fly planes.

Here’s the situation, luggage-wise, in Britishland (where they can’t blame Biden, but they can blame their own BritGov for mandating similarly moronic policies): 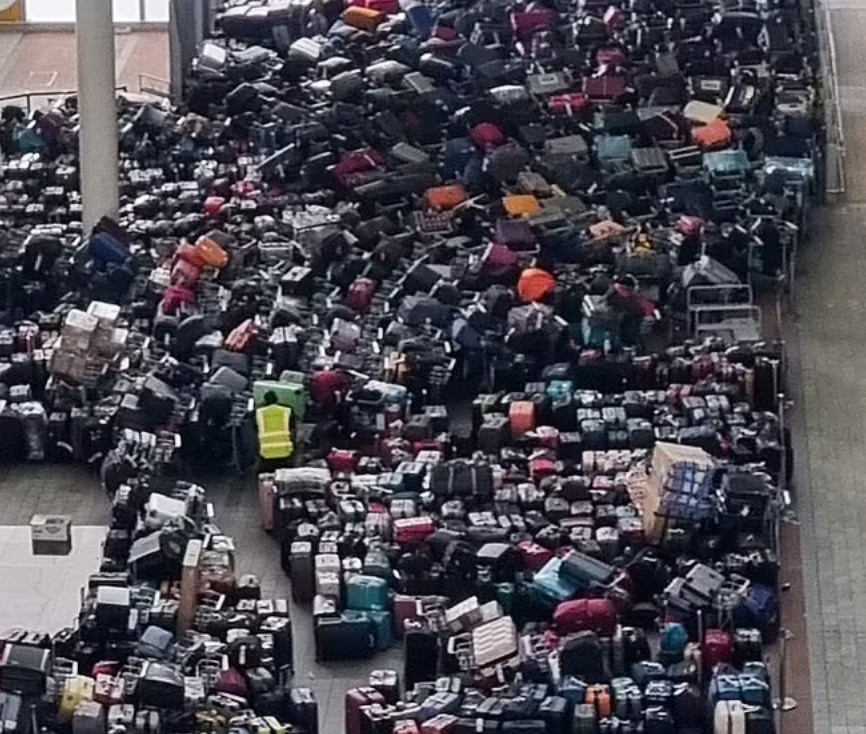 That’s just one airport and one baggage gate, but apparently similar scenes can be found at all Brit airports right now.  What a fuck-up.

My rule of not taking checked luggage on any flight is looking better and better — and if I can’t pack sufficient clothes for a trip, I just set aside a little money to buy whatever I need Over There.

Not, mind, that I’ll be able to afford to fly anywhere for the next decade after Qantas Fucking Airlines emptied my wallet, twice in one year.

Speaking of which:  New Wife gets in tonight from Oz, U.S. Immigration permitting.  (That’s another whole kind of cock-up, but I’ll talk about that tomorrow.)