Well, you caused me to impulse buy a Ruger SP101… and I thank you for it! When you suggested one for my sister, I found some French Police trade-in guns for $450 chambered in .38 spl, which is fine, I’m not the type who enjoys shooting .357 magnums out of small guns–it’s like hitting yourself in the head with a hammer because it feels so good when your head stops hurting. Anyway, I have a nice new carry gun for use with plenty effective +P loads. So here is a post I put up at Ruger Forums, thought you’d appreciate it and the pics. Thanks for helping me make an impulse purchase!  I love this thing!

Oh, and the grips are made by now defunct Trausch, in Germany. Those are the grips they put on the Manurhin revolver you wrote about a while back. Atlantic Firearms still has some if this makes your trigger finger itch.

Well, had it out to the range already. Love it! The trigger is not bad, but I do have the Wolff spring kit and plan on trying the 12# spring. If I like it, I’m not after the lightest pull and I’ll stop. If I feel like I should try the 10# it will take 300 rounds of practice ammo to get me confident in it, but I bet the 12# will do the trick. Other than reaming the trigger return spring channel, I’m not planning on doing all that Mcarbo polishing, I doubt it’s needed.

Love the gun, especially the grips, as has been mentioned. They are terrific! I did not have any issue with a speedloader at all with them. Very comfy little gun. I can see this is the .357 sized gun, the chambers are just reamed a bit shorter, it’s very obvious, so no measuring needed. I’m confident enough in the +P stuff, I’m not really interested in reaming it out to shoot .357 Magnum, I do that in my Security Six.

Finally, I got a Galco Combat master for it, and it’s a great holster. They usually have some kind of 15% off promo deal, and I got one. Yeah, I’ve had fancy one-man-shop holsters, but IMNSHO, you can find a cheaper holster than the Galco, and you can find a better holster than the Galco, but you can’t find a better holster for less money than a Galco. They are top quality products at reasonable, if not cheap prices.

Other than the spring replacement, the only other thing I plan on doing is easing the edges of the trigger and the trigger guard, they are a bit sharpish. Maybe I’ll polish it up like I did my little Taurus 85CH snubby, but not sure I have that much energy. We’ll see.

Here is a shot of what I took to the range yesterday. 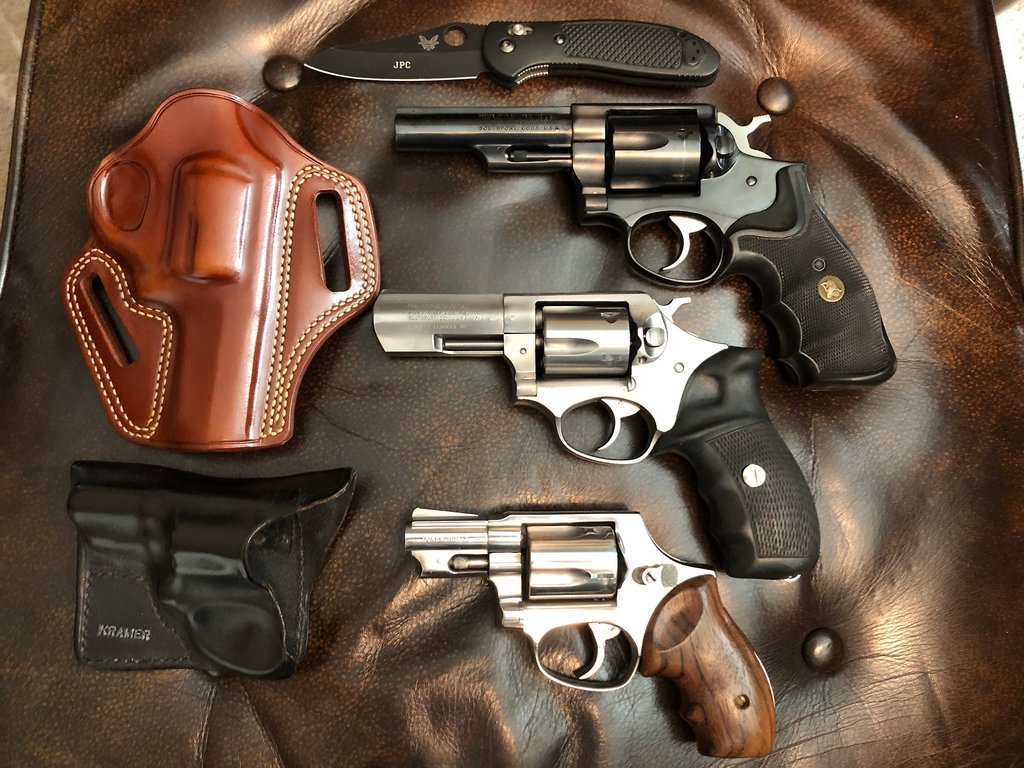 I love a well-turned-out range session, myself.  Lovely.

Yeah, that’s me:  a Bad Influence.  As I recall, when John first came to this website, he only had one or two guns.  Since then, he’d accumulated well over a dozen — until that unfortunate canoeing accident, that is.