Smart-Ass Reader Joe G writes and asks me:  “If you’re as old-fashioned as you say you are, why have you never considered a shotgun that uses hammers instead of those newfangled hidden devices?”

It’s a good question (if a trifle impertinent), but let me open the discussion by showing one such, the (new) CZ Hammer Coach (~$900):

It is a strange thing that while we gunnies are all over the idea of single-action handguns (e.g. Colt Single Action Army revolvers), the same principle doesn’t seem to apply when it comes to shotguns, and it shows in the sales thereof.

Not many gun manufacturers make the old-style hammer guns anymore, other than in a style reminiscent of the old “stagecoach” short-barreled things (like the above).  And I’m not interested in a 20″ barrel, unless in a designated self-defense piece like a pump-action.

But if one wants a long-barreled hammer shotgun, the choices are scant:  either a hammer gun that is so old it’s unusable, like this old Gibbs from 1885:

By the way, this Purdey would already be mine apart from reasons of poverty, because it is drop-dead gorgeous (right-click to embiggen both pics):

So why don’t I have or want one of these oldies?

It’s a simple reason, really:  nobody makes (or has ever made, apparently) a hammer gun in 20 gauge.  My days of shooting 12ga shotguns are over (brief as they were to start off with) because my shoulder just can’t take the sustained pounding of the big guy anymore.  And given that I mostly shoot clays nowadays, I am likely to pull the trigger upwards of a hundred times or more in a session.  And even that creates a sizeable bruise with 20ga, not that I care — but with a 12ga?  Yikes.

Of course, there’s this fine W&C Scott offering, which although originally barreled for 12ga, has been re-sleeved to 20ga, and is a steal at a mere (coff coff ) $7,500: 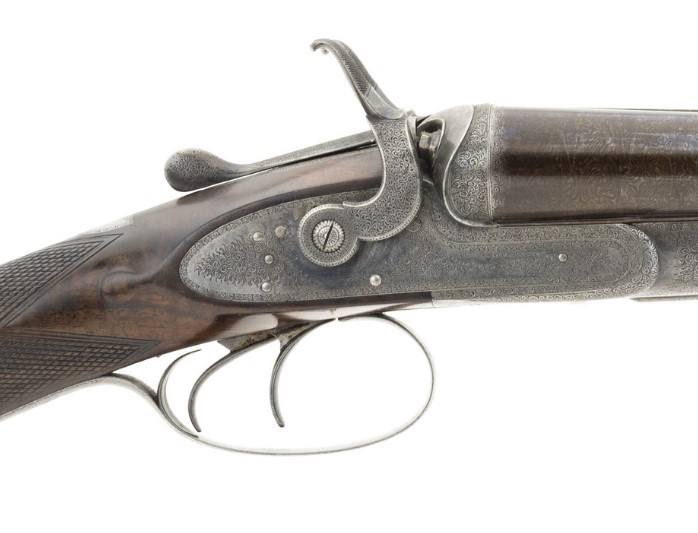 So I’m not that averse to the idea… but practicality gives me a kick in the ass, as it usually does (sigh).