It occurs to me that we haven’t had a decent pic of a gun on this here website in ages, so without any more to-do, here goes:

Like the similar-but-not-identical Czech Model 1924, the Mauser 24/30 rifle was made for the Venezuelan army by Belgium’s Fabrique National, and not by Mauser (the Germans having been banned from making weapons for being Very Naughty Boys between 1914 and 1918).

I happened upon one of these beauties at a local gun parlor, and were it not for the fact that I had only the budget to buy Daughter her carry piece, I would have walked away with two guns that day — a not-uncommon occurrence during Times Of Plenty back then.

If you can find one in  minty condition, this is not a rifle to be left on the rack.  The action is (duh) Mauser 98, the chambering is for one of my favorite cartridges, and were I to see that same one right now, I would sell a child or something to get it.   Here’s a comparison of like cartridges: 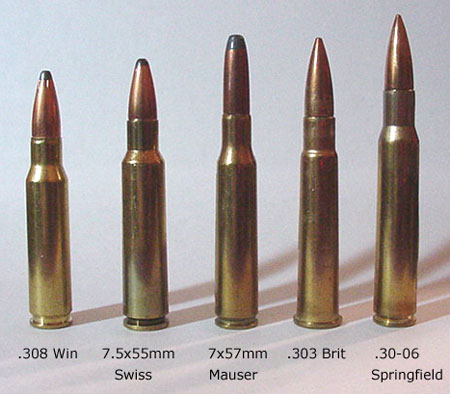 …and you can see that the 7x57mm is different from all the rest in that it has a long, thin bullet which provides excellent penetration.  This, lest we forget, is the same cartridge which kicked the .30-40 Krag’s ass during the Spanish-American War, and pushed the U.S. Army towards the .30-06 Springfield as a replacement.

I like the 7×57 because its recoil is relatively light, although I will also concede that it’s not the flattest-shooting cartridge past 200 yards.

But for an all-purpose rifle that can handle most small- to medium game and errrr two-legged targets with the same effect, you could do worse — a lot worse — than have one of these in your safe.