Okay, once again I am compelled to stand athwart the tide of gun trends, and cry “STOP!”.

The object of my discontent is this trend towards “assault pistols” such as the ones which appear here and feature guns like these:

Let me make my feelings on this type of gun quite clear:  if they were full-auto (select fire), i.e. sub-machine pistols, I would take one in a heartbeat.  But as pistols, they’re shit.

Bulkier and heavier (ergo  unconcealable) than a regular Glock, 1911 or S&W semi-auto, firing the same Europellet poodle-shooter ammo as most pistols nowadays seem to be doing [sigh], and beloved of SWAT-fanbois everywhere, they fail as pistols and are inferior to pistol-caliber carbines in terms of accuracy and punch.

Aesthetically, they look like shit — cobbled together by some Bubba in his workshop somewhere — and they’re overpriced.  Such is fashion, and it’s as true for guns as it is about, say, shoes: 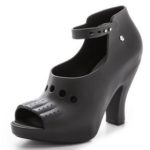 (The one on the left looks like the shoe equivalent of an assault pistol, and the pink disasters are actually from Balenciaga.)

I think the problem started when CZ converted their wonderful Skorpion subbie into semi-auto: 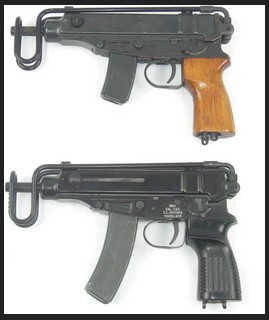 …and all of a sudden, AR and AK variants of the same concept started sprouting like poisonous mushrooms.

Your taste, your choice (and dollars), of course, and if you think that owning one of these makes you look like some kind of “operator”, be my guest.

On the other hand, if you want one of these because it causes anti-gunners, the media and gun-fearing wussies [some overlap]  to reach for their smelling salts, go right ahead.

Just don’t expect me to join you.