So I took myself off to the range yesterday, accompanied by these two other old guys: 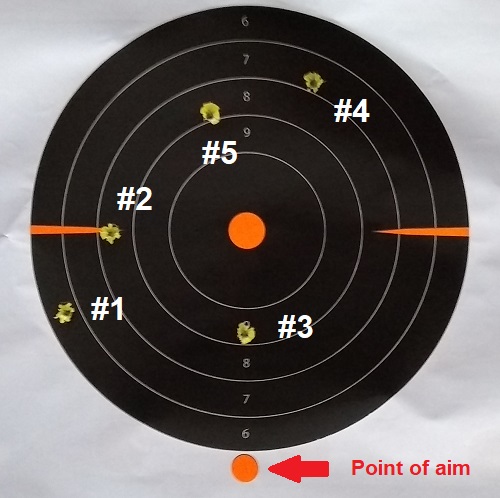 I’d noted in earlier targets that the gun was shooting high, hence the low hold.  However:  while I could sort of make out the front sight, the back V sight (tiny, as all Mauser shooters know) was simply an amorphous blur, and I had absolutely no idea whether I had the sight picture properly aligned, or not.  Here’s a rough idea of what I’m talking about:

…only the rear V was even more blurred than that, making it impossible to get a clear and consistent sight picture.

It’s not the rifle;  it’s me;  although I am a little concerned that it’s shooting so high, it might just be that I was shooting with sight pictures #2 or #5.

I need to get my eyes fixed, pronto.

Anyway, on to the (post-’64) Winchester 94.  This time, I set the target at 50 yards, and figuring that it would shoot high, I held the same point of aim.  These were all fired offhand (standing, unsupported), because I doubt very much whether I’ll ever benchrest it.  Ammo was Winchester Super-X 170gr SP: 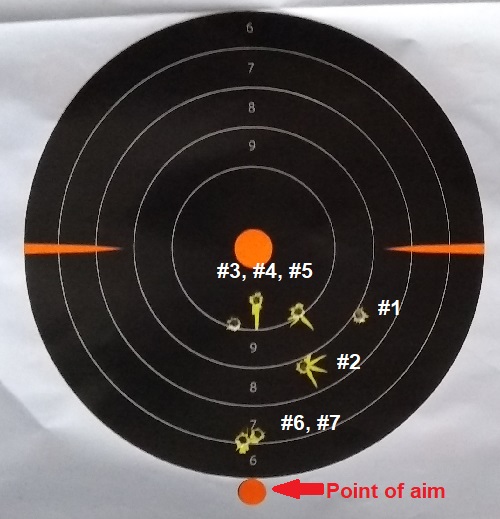 Unlike for the Mauser, I fired no “warm-up” shots, just loaded some rounds into the tube and let fly:  I know how to shoot a lever rifle.

Just not this one.  The first five shots were all over the place because I discovered that there’s absolutely no take-up in the trigger:  once the hammer is cocked, apply about 3lbs of pressure, and off she goes.  So I took my time with the last two (#6 and #7) and was amply rewarded.

I should also admit that twenty rounds of 8x57mm took quote a toll on my shoulder, whereas the .30-30 was an absolute breeze by comparison.  Next time I shoot the Mauser, I’ll use either a shoulder pad or a removable rubber pad to help my ancient shoulder handle the recoil.

Note:  Ammo for both rifles came from J&G Sales.  I paid a small premium for the S&B for two reasons:  I hate shooting corrosive ammo, and I trust the Czech ammo to be consistent (as it has been for me in the past).  Likewise, I bought the Winchester ammo because the thought of shooting Winchester ammo through a Winchester rifle gave me a warm & fuzzy feeling.