I was wondering how long it would take for this kind of thing to happen:

A statue of Martin Luther King Jr. was vandalized with SS bolts and a swastika in Long Beach over the weekend. It is the second time in two years the statue, erected in 1986, has been targeted, after a plaque bearing one of his quotations was stolen in 2019.

What’s interesting is that it happened in oh-so liberal California (although it should be noted that Long Beach does not share the same socio-political profile as, say, San Francisco or West Hollywood). 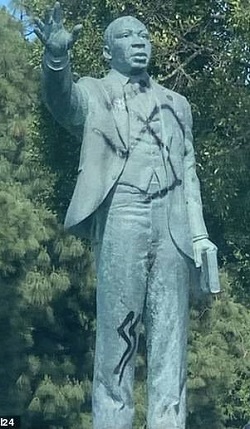 To all those assholes who think it’s okay to desecrate monuments to past heroes like Thomas Jefferson and George Washington while revering those like Martin Luther King, let me just say this:  you started it.

I’m not excusing this kind of thing;  but I do understand the rationale.