I will confess that I am no longer the beer drinker I used to be.  [pause to let howls of rude laughter from The Englishman and the other regulars at the King’s Arms to die down]  Seriously, I have.

As I’ve matured in years, I’ve moved on to spirits like gin, Scotch and [list of spirits redacted because of length]. Nevertheless, I still enjoy a beer or two or three, depending on a) the beer and b) the company I’m socializing with.

My besetting problem is that I just cannot find a decent beer in the U.S. that can hold a candle to English beer, specifically ales such as Wadworth 6X, Fuller’s London Pride or even Boddington’s.  The last tastes completely differently Over Here compared to its regular domicile Over There;  I suspect it doesn’t travel well in cans — does any beer? — and although London Pride does not suffer the same fate, I either have to go rooting for it in divers liquor stores hereabouts — it does not have good distribution — or else head to The Londoner several miles away, which means I can’t drive back because, well, pints.

And I don’t want to drive all the way up to Boulder CO just to buy Wadworth 6X because quite frankly, it’s sold in cans and even 6X liketh the cans not (when I’ve drunk them Over There), and I’m not going to drive a thousand miles or whatever it is, only to find shit beer at the end of it.

Likewise, I’m not interested in touring the “craft” breweries around here (even though there are dozens) because in the past I’ve discovered that recommendations from others always fall short.  (Readers please take note before you offer up suggestions in Comments.)

I’ve often thought that Mexican Modelo Negro is the closest in taste to the English ales, but until now I’ve never bothered to test the hypothesis.  So as a public service, I set one up.  Here are the culprits: 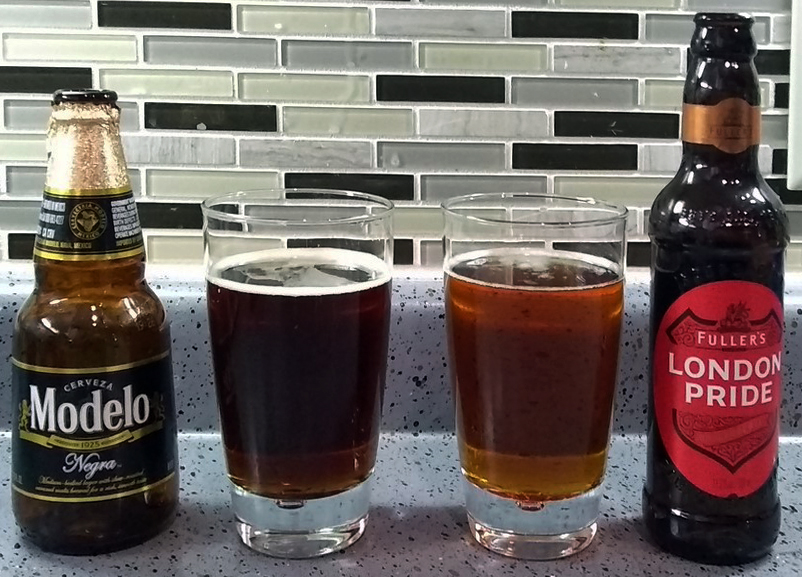 As you can see, the Negro is considerably darker than the Pride, and drunk side by side, it has a harshly-bitter taste compared to the English ale.  (I should also add that I got rid of some of the Negro’s fizz, and let it warm up just a little from refrigerator temperature as I did with the Pride.  Don’t tell me I shouldn’t do that, by the way:  I loathe fizzy drinks of any kind, and dislike ice-cold beer unless drunk on a hot day in South Africa, when I drink Castle Lager in any case.)

The worst thing about the Negro (speaking from past experience) is that after just two or three of the things, my mouth starts to taste like I’ve been drinking vulture vomit and I’m forced to change to something better-tasting or at least a little sweeter (e.g. gin, dark rum & Coke or Southern Comfort), and we ahem  experienced drinkers all know where that action takes us.  That taste, by the way, never happens to me when I’m drinking beer in England and once embarked on a course of 6X or London Pride I stick with it, as many of the aforesaid denizens of Wiltshire and London may attest.

Mr. Free Market doesn’t frequent pubs all that often, as he doesn’t like getting “full” on beer, and drinking whisky at British pub prices makes too huge a dent in even his capacious wallet.  So when I go Over There, we end up drinking either in his garden (in summer) or his living room (all other times) and because there’s no driving involved, only stair-climbing (don’t ask how many stairs are involved in negotiating Free Market Towers), I end up getting a lot more shitfaced than I do at the King’s Arms, where I generally have to call time after only half a dozen pints so I can find my way home, wherever that is.  No such restriction exists at the Towers, which means I have, on occasion, had to sleep (okay, pass out) in one of the several living rooms or parlors that are scattered about the ground floor.

Anyway, what disturbs me in all this was a conversation I once had with Mr. FM, in which he confessed that he’d rather lost his taste for beer — and the awful thought occurred to me that perhaps I may be heading in that direction too.