I was sucked into the Forgotten Weapons Matrix a little while ago, and during Ian McCollum’s dissertation on the Sig-Manhurin 542 rifle, my train of thought went off down a branch line — I’m an old guy, it happens — and I ended up wondering:  why was the .243 Win never adopted as a military cartridge?

(In the interests of full disclosure, I should point out here that I am a HUGE fan of the .243 Win, especially when loaded with a 90gr bullet.)

That’s a lot of powder (assuming that it stays the same amount as in a .308 Win cartridge) to send a much-smaller bullet downrange, which means of course that there’s a lot of velocity involved — and, as a welcome side-benefit, because there’s less inertia to overcome to get a smaller bullet moving than a bigger one, less recoil.

The latter was given as being one of the reasons that the 5.56mm NATO was adopted, by the way (that and the reduced weight of the cartridges themselves), but it came at the expense of knockdown power.  Also of interest is that the 5.56 NATO generally uses a 55gr bullet — but, for that matter, the .243 can handle a 55gr bullet as well, and it really races out of the barrel.  Once again, a comparison:

The only problem with the 5.56 NATO is that if you try to increase the knockdown power of the poodleshooter by shooting a heavier bullet like (say) one of 90gr, that little casing can’t hold more powder to make up for the severe loss in velocity — whereas in a larger casing like the .308 Win, bullet weight could even be doubled to 110gr without too much effect on velocity, or recoil.

So just as an intellectual question, I ask myself:  why would the .dotmil settle for a hot .22 cartridge when a downloaded .308 would do the same job (at worst), and could easily do a lot more with only a modest increase in bullet weight (say, from 55gr to 75gr)?

If we accept the fact that the earlier .30-06/.308 Win battle cartridges were just Too Much Muscle (or required too much muscle) for our soldiers (as suggested by the military brass), and we ended up adopting a vastly inferior cartridge (the poodleshooter .223);  then why should we not have compromised and used instead a 6x52mm / .243 Win cartridge?  (Of course, I am still of the opinion that the British suggestion of a .276″/6.5mm chambering was the best of all, but let’s not revisit that old story.)

Frankly, I think we missed a good opportunity here, and I think that had we adopted the .243 Win chambering in something like the aforementioned SIG-Manhurin 542 (essentially, a higher-quality AK-47 design) as our mail battle rifle, we would have been a lot better off. 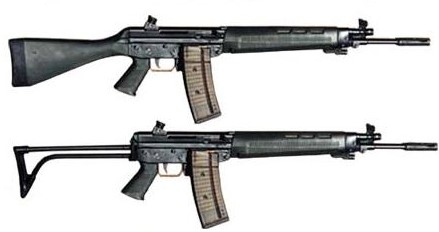 For that matter, the AR-10 (suitably barreled) would have been just as good a choice, if the thought of dumping Eugene Stoner’s rifle for Sergei Kalashnikov’s gives one the vapors.

Either way, the question is this: 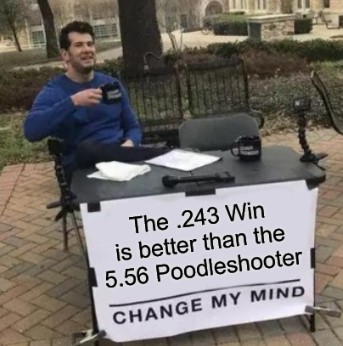