Via Insty (thankee Squire), I see that our favorite shooting rag has a piece about a new Bond Arms Derringer: 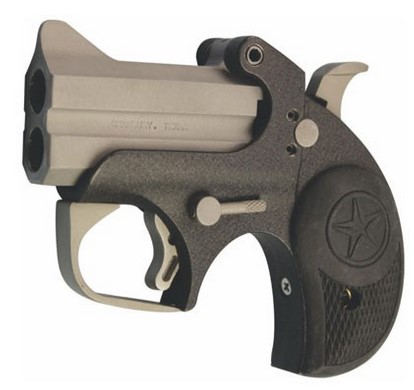 Speaking personally, I think it’s pig-ugly;  but no doubt someone will soon be telling me how matte is the new black, or something, and all the cool kids are carrying it.  Whatever.  I like ’em shiny (and without that sissy trigger guard): 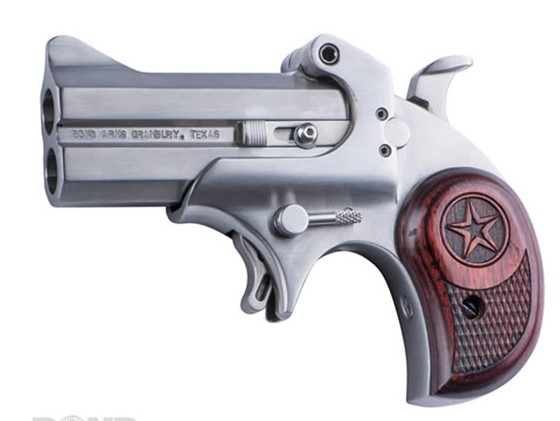 But anyway, it was Insty’s comment which got my attention:

IT’S BASICALLY A .45 DERRINGER, SO I EXPECT IT TO KICK

That has not been my experience (remember that I am an infamous recoil wussy).  I’ve had two of these beauties in my time — in .45 Long Colt /.410ga, and in .38 Spec/.357 Mag — and I didn’t find the recoil in any of the four chamberings to be too unpleasant.  Here’s why.

I think that the teeny lil’ barrel helps.  Basically, it seems to me that before the burning powder can get up to full oomph in the chamber, the boolet has already left the building, so to speak.  Even .410 slugs were stout, but quite manageable — especially when you remember that Derringers are “halitosis-range” guns, in that even if the scumbag doesn’t immediately die from the boolet, the muzzle flash should set his fucking clothes on fire to complete the carnage.  And forget the loss of muzzle velocity from the tiny barrel — at 4″ distance from the target, it’s very much a moot point.

I wouldn’t want to let off hundreds of rounds of serious centerfire ammo in a single session at the range with a Bond Arms Derringer, mind — half a dozen would do just fine, thank you — but frankly, even a dozen-odd rounds of .45 ACP wouldn’t be too much of an imposition on one’s shooting hand.

What I’ve always liked about the Bond Arms guns is that they are heavy, baby — which means if you hold it in your hand and give someone a swift smack on the side of the head with it, he is going to go down.