I think I’ve said before that I can understand why someone won’t shoot a particular gun — its extreme age makes it risky, its historical value, or maybe shooting it would devalue it from its “unfired NIB” value, to give but two reasons — but all I’m saying is that I sure as hell wouldn’t hold off from popping some lead downrange with it.

Here’s a prime example, from one of the Usual Suspects, of a presentation-worthy Browning Medalist target pistol: 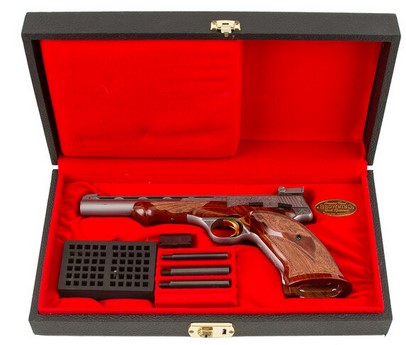 (The link has all sorts of fine pics, showing the engraving and so on.)

Now Barnett wants $7,500 for this unfired beauty, but there’s something eating at me about it (other than the silly price, of course;  maybe it’s worth it — I don’t move in the Browning Collector Set circles, so I wouldn’t know).

A precision target pistol is made to be used.  All that smithing and careful detail in both its design and manufacture is completely wasted when it’s just going to sit unfired for 35 years in some guy’s safe, and only taken out to be lovingly wiped down (or shown off), then put back for another decade until, eventually, it gets sold.  I mean, WTF?

Sorry, I just can’t get my head around it.  And let’s be honest:  what might make the next owner not want to shoot it is the fact that he just dropped over seven grand on its virginal goodness.  We don’t even know if the thing is accurate — it’s precision is all potential, not actual.

All I can say is that it’s a good thing I haven’t yet won the lottery, because if I had, that Medalist would now be in my possession with its trigger pulled well over 500 times.  And if just the thought of that makes you get the shivers, we live in different worlds.

And if it’s too pretty to be fired, then I wouldn’t buy the stupid thing.