“Never let a crisis go to waste [when furthering your own objectives]” is the mantra of the Socialists, and indeed they grab it whenever they can.  Thus:

The mayor of Champaign, Illinois has declared a town emergency over the Wuhan coronavirus that includes a potential ban on the sale of firearms and ammunition.
According to a local report from WAND 17, Champaign Mayor Deborah Frank Feinen has issued an executive order that would give her office “extraordinary powers.” She has issued the order despite the town and surrounding area not having a single case of the disease.

Of course, controlling gun- and ammo sales would do nothing, nada, zip and zilch to contain, cure or prevent the Wuhan virus, but the point is not about relevance, but about opportunity.

So of course the Marxists in government are going to grab at it with both greedy little hands.

I imagine that the road traffic between Champaign and, say, Indiana is going to increase rapidly, and Illinois is going to lose serious money in taxes stemming from lost gun- and ammo sales;  but that doesn’t matter, comrade, as long as the aims of The Movement are being satisfied.

And to all Commies, of course, if there’s a problem only Gummint can fix it:

“There should be a national approach to ensuring every factory that can make hand sanitizer should be on 24/7 shifts and the distribution could go to the places that need it most” [Chief Commissar of NYFC] de Blasio said.

You want to see real shortages?  Let the State decide on selection, production and distribution.  I can see the headlines already:

Let’s hear it from Comrade Stalin: 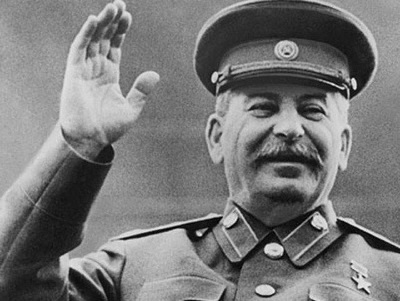