For the last 10 years or so, though, the standard answer to the “What pistol?” question has been a polymer-frame, striker-fired, double-stack pistol chambered in 9 mm. The temptation is definitely there to think of writing “The End of History and the Last Pistol.” But how did we get here, and what could be next?
For the reasons behind the pistol type itself, it comes down to simple cost. There’s nothing more modern about a striker over a hammer. John Moses Browning’s first semi-automatic pistol, the FN Model 1899, was striker-fired. It’s not intrinsically superior mechanically, either. In fact, it has a few downsides. A hammer generally gets better ignition reliability, and a hammer allows the use of lighter recoil springs since the force required to override the hammer provides much of the initial braking force to the recoiling slide.

Frankly, I would have had a different title — and probably, a different emphasis in the piece altogether.  Let me illustrate why.  Here’s the timeline graphic as it appears in the article: 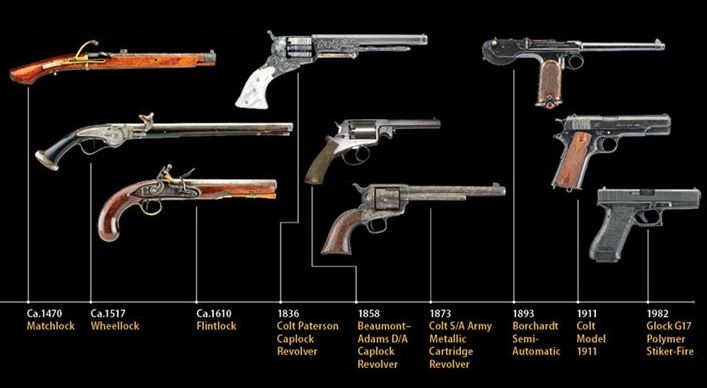 …and here’s my take on the same graphic: 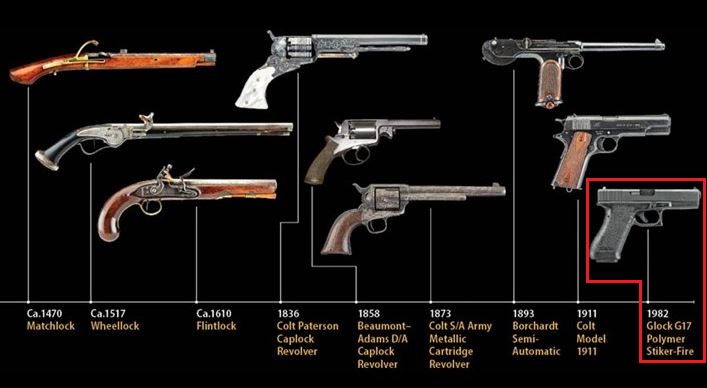 …which would lead to my headline:

Have We Gone A Gun Too Far?

You see, I question the appearance of the Glock G17 on the chart altogether (and I should point out quite emphatically that I’m not  taking a dig at Tami).  It’s not the first striker-fired pistol (as Tami points out), and it’s certainly not the first semi-auto pistol.

But Tami’s next sentence, while correct, gives the game away:

The striker’s big advantage is simplicity, which translates to a less-expensive gun. There’s just no way to produce a hammer-fired ignition system as cheaply as a striker-fired one. Similarly, there’s just no way to chisel a frame out of steel or aluminum as cheaply as one can injection-mold one out of polymer. When it comes to the real world of accountants and budgets, the cheap gun that works just fine is going to displace the more-expensive gun that also works just fine.

All true, and all well and good.  But just making something cheaper  doesn’t warrant a place on the timeline, any more than making a more efficient (and more expensive) double-action revolver than the Beaumont-Adams (e.g. a Colt Python) would merit a similar inclusion.

Just because the Glock is one of the most popular handguns around doesn’t make it a step on the Gun Evolution Ladder, in other words.

Here’s my final thought on the matter.  For decades, we bought our Coca-Cola in glass bottles.  Then glass containers gave way to plastic bottles — which makes a case for a place on the container  timeline, but not one for inclusion on the soft drink  timeline.

I know, I know:  I’m splitting hairs here, and we all know the Glock is the greatest thing since ice cream etc. etc.  Except it isn’t.  It’s a cheap-to-produce plastic container, and its only real benefit is to the accountants.  As for the “cheaper” part, here’s the Gospel according to Bud:

But whatever.  Y’all can carry a Glock (or any of their copycats), with my blessing.  It’s not a horrible pistol;  it’s an affordable, effective and reliable gun.  Me, I’ll stick to my 1911 (which is on the timeline — and justifiably so) and one day, maybe, a Colt Python.

The rest of the article has to do with ammo, but everybody here knows my opinion about the 9mm Europellet.  Likewise, I’ll stick to .45 ACP and .357 Magnum.

And this exchange in the Comments to Insty’s post had me chuckling: 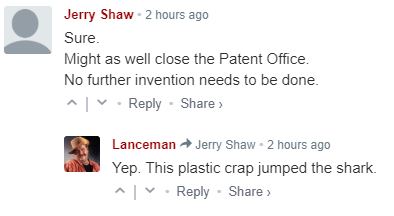