This post is appearing early in the morning so that if any of you are off to the range later, you can make the necessary preparations.

A while back I was reading about the practice method known as “spot shooting”, something I’ve been doing forever, but didn’t know it had acquired a name.  Put simply, it’s a routine whereby you fill a blank target sheet with small circles, then shoot one (and only one) shot per circle in the shortest possible time.  Here’s how to do it.

The next time you go to the range for some .22 practice, get one of the cheap full-sized silhouette paper targets (or, if you’re one of the people who buys the things in bulk, then takes a few to each range visit, keep one aside after your regular practice session).  Then affix a hundred small circle targets onto the paper, spaced about two inches (2″) apart — rows are best so you can see where you are — then load up the necessary numbers of mags, and get going.  Here are two examples of the target spots, the Birchwood Casey orange dot and the Shoot-N-C type: 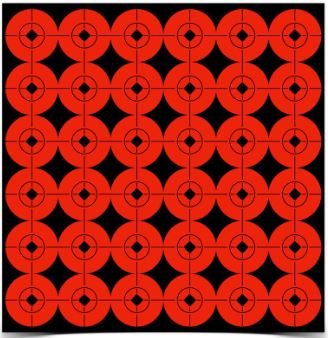 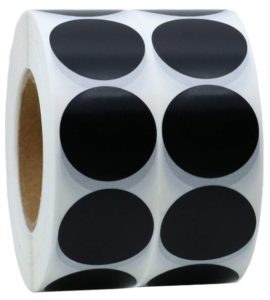 These are the two more expensive ways to practice this drill, by the way;  real  Cheap Bastards (e.g. Kim) will go to a discount store or online and buy rolls of the little price tags such as made by ChromaLabel, which have the advantage of being multicolored, available in 1″, 3/4″, 1/2″ or even smaller sizes, and they typically cost less than a penny per spot.

The advantage of this is that it’s a really cheap method of practice, and it is cruelly unforgiving:  there’s no “9-ring” or similar types of escape routes — just a small circle which either has a bullet-hole in it, or not.  It is also unbelievably tiring, mentally.  People often boast of how they blast off many hundreds of rounds at a single practice session, but a hundred in a single practice routine?  Be my guest:  if you’ve never done it before, it’s a whole lot tougher than it looks.

At the end of the routine, you score yourself out of 100, and anything less than 100% represents failure (there is no participation trophy in precision shooting).  When / if you do manage to get 100% consistently (good luck with that), then start timing yourself (or have a range buddy time you) and try to get that same 100% in less and less time.  (It doesn’t need to be stopwatch-perfect, especially the first few times you do it.)

Here’s what this wonderful practice routine teaches you:

About six months ago I got my first-ever 100, with a Browning Buck Mark borrowed from Daughter, shooting the 3/4″ dots at 10 yards.  I felt like doing a victory lap around the range, or at least a Happy Dance, but apparently jumping around like a lunatic while firing bullets into the ceiling is not Acceptable Range Behavior, for some reason.

By the way, this is also a great drill when practicing with your carry piece — only it gets a little expensive even if you’re reloading.  I normally end my session with just one or two mags’ worth of dots (say fifteen rounds of .45 ACP or twenty-five rounds of 9mm), also at ten yards.  I don’t take too much time either:  I shoot what I call “rapid deliberate”, which is about 1.5 seconds per shot.  And if you think this is too easy, toughen up your scoring criteria:  half a bullet circumference or more in the dot counts as a hit, less than half is a miss.  I’ve never yet hit every dot with my carry pieces, but I’ve come damn close.

All this shooting talk is making my finger itch.  If you’ll excuse me… I think I need to go load up my range bag.