No wonder they’ve had to declare war on each other every decade or so.

Basically, it’s Latin’s fault.  That Roman nonsense gave every word a gender (with the wonderful addition of a neuter gender which wasn’t very common).  Additionally, Latin has no articles (the, a, an etc.) — which I think is why words had  to have a gender, so that the listener could determine to which word an adjective was being applied to.  Here’s a little summary:

There is a stark difference between English and Latin’s treatment of gender. Only words in English that indicate a biological sex have a masculine or feminine gender. All others are considered neuter. Latin, however, applies gender to many words even when biological sex is not intimated.

No wonder the bloody thing died off.

But that’s not the end of the story, oh no.

As European languages modernized, they added articles — except that with gendered nouns, the articles had to change to continue the form.  Hence la roche  (rock), le matin  (morning) and so on.  German went the same way:  der Zug (train), die Eisenbahn (railway), etc.

All that, so that this little meme would make sense to everybody who’s not a language dork like I am: 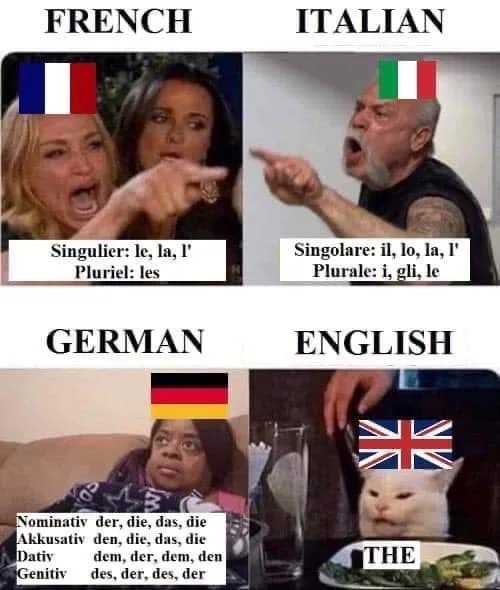 Of course, as can be seen in the above, the Germans took the thing to its logical conclusion and over-complicated their language almost to the point of impossibility, making the article also reflect the nouns’s declension case  as well as its gender.  Don’t get me started.

At least the Germans are usually too polite to correct you when you screw up, and will sometimes even switch to English if they can.  The French, however, have no such scruples and will correct your grammar, loudly and often with a smirk — which makes my already-fragile temper turn homicidal in a millisecond.

Thank goodness English is gradually taking over as the international language of business, and is the backbone of this here Intarwebz thingy.

I still read Le Parisien  once a week, though.