I read this story with interest few days ago, and it seems like a classic case of animals striking back at humans:

“A chimpanzee came in the garden as I was digging,” Ntegeka Semata said in an interview with the publication. She noted that her four young children were with her and as she turned her back to get water, the chimp took her child by the hand and ran off.
The child screamed, which caused the other villagers to pay attention and chase after him, but it was too late. “It broke off the arm, hurt him on the head, and opened the stomach and removed the kidneys,” Semata continued, adding that the child died on the way to the local hospital.

Here’s the thing.  The article points out that chimps share about 94% of their DNA with humans — i.e. they’re the closest thing to us in the animal kingdom.  That does not make us kinfolk, by the way (just in case the above story didn’t get the point across), and chimps are total assholes:  they exhibit all the bad traits of human behavior (murder, cannibalism, torture etc.), and there’s nothing at all cute about them.  A friend back in South Africa once described their look as “trying to decide which way to kill you”, and he’s not wrong about that. 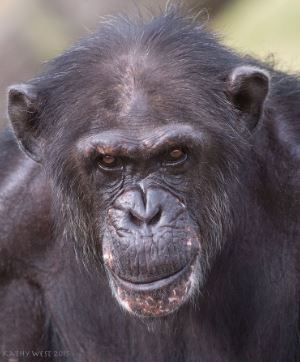 I was driving through the Kruger National Park once, and I’d stopped to take some photos of a herd of buffalo, when a young male chimp jumped on the car’s bonnet and stood peering into the car through the windshield.  As it happened, I’d left a pack of potato chips on the dashboard, and when the chimp saw it, he started to gibber and jump around, trying to reach the packet through the glass.  Of course, I burst out laughing — and when the chimp heard my laughter, he stopped dead and stared at me with that  look.  Then he ripped off a windshield wiper as though snapping a pretzel, waved it at me, then scuttled off with it like it was a trophy.  It was the most human act I’d ever seen from an animal, any animal.

I should have just shot the little prick but they take a dim view of that kind of thing at the Kruger Park, so I just drove off, seething*.

So yeah, I can quite imagine that the chimp in the article above was pissed off at humans, and destroying their habitat sounds as good a reason as any.  They know  who’s responsible, you see, and some kind of retaliatory action is not at all surprising.

The next time you see some movie where chimps are freed from a medical research facility and set about causing mayhem and murder, I’m here to tell you that it’s not at all far-fetched.

*Update & Correction Dept.: A couple of Alert Readers contacted me and told me that what happened to me in the Kruger Park was doubleplus unpossible because chimps are tropical jungle-dwellers and not found in Seffrica, ergo it must have been a baboon.  In high dudgeon, I went to find the pictorial evidence (i.e. a photo) that I took of the little bastard… and it was indeed a baboon.

What the hell, they all look alike to me.