Longtime Reader DarrellM sends me this snippet from Dan Wesson:

It started as an experiment — a grand melding of Dan Wesson and CZ pistols. Borrowing the crisp single action fire control group of a DW 1911 and combining it with the ergonomics and capacity of a CZ, the resulting pistol emerged as something great.
…
Designed initially for competition use, the DWX has evolved into much more than that, with both full-size and compact variants. Its locked breech barrel system is simple, ditching the standard 1911 link system and using CZ-style takedown via the slide stop. The easier take-down will be familiar to any hammer-fired CZ owner, as is removing the Match-grade barrel due to the bushing-less barrel system that resembles a P-10 or P-09/P-07. Double-stack magazines boost the capacity of the full-size to 19+1 with flush bases, and many standard 1911 parts enable gunsmiths and competitive shooters to tune the X just the way they like it. Sights are easily customized, using a 1911-style dovetailed sight in the front and a CZ Shadow 2 style sight cut in the rear. 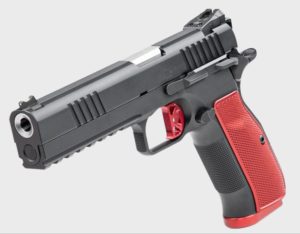 Apart from the front-slide serrations (ugh) and the somewhat gay red accents (double ugh), this “marriage” pushes all my buttons.  Reader Darrell admits to being a fanboi of both the 1911 and CZ 75 (as am I), but the only thing that puts both of us off is that the suggested retail price for this lovely thing is not a true marriage:  it’s too much Dan Wesson and not enough CZ,  i.e. at nearly $1,800 it’s out of reach for both of us.

That said:  a 1911 single action with 20-round capacity and easy takedown?  Hand me mah smellin’ salts, Prissy…

Put some lovely wooden grips on it, lose the cherry-colored trigger and resist the urge to carve out the front serrations, and I’d be very  tempted to sell a kidney or something. 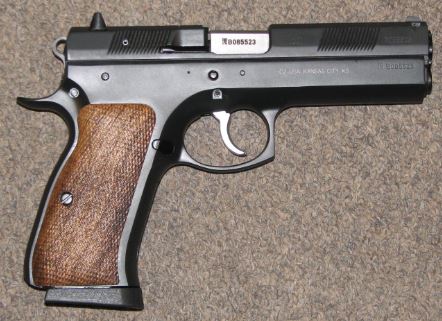