I think the 1980s get a bad rap about just about everything (although I will agree that the female shoulder-pad thing has deservedly been tossed in the trashcan of history).  I generally enjoyed the 80s music — Level 42? Oh, mercy! — but I have a soft spot for many of the era’s cars as well.  Here’s one, the Lancia “Rally” 037 Stradale:

From the boffins at Classic Driver  comes this little bit of history (with my emphasis added):

The Lancia Rally formally debuted in March 1982, and homologation was certified on 1 April 1982, by which time 207 examples had been constructed. The 037’s first competition test was the Tour de Corse in May 1982. Although the new car finished a promising 9th overall, Lancia recognized that the 1982 season would be used for intense development rather than a championship run. The year ended with Markku Alén and Ilkka Kivimäki taking their 037 to a strong 4th-place finish on the RAC Rally. The following year, 1983, saw Walter Röhrl and Markku Alén lead the Martini Racing Lancia team to wins at Monte Carlo, Tour de Corse, Acropolis, New Zealand, and Sanremo on its way to the 1983 World Rally Championship—Lancia’s fifth championship and the last WRC title by a two-wheel-drive car.

Does anyone still wonder why I would take one of these beauties in a heartbeat?  And here’s how one would get access to that superb little 2-liter engine (which delivered 200hp in the street car, and 280hp in the rally version): 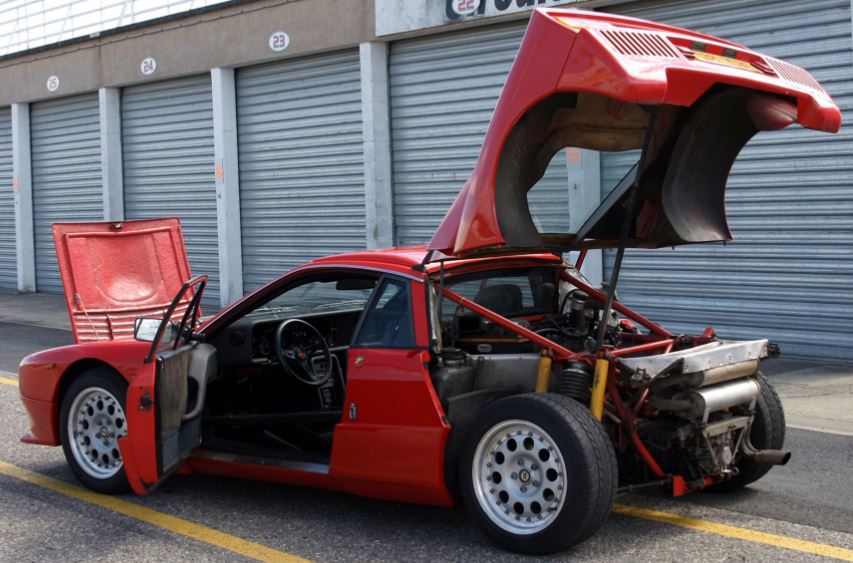 I’ve only ever driven a Stratos (breathtaking, literally) and the pretty little Fulvia (the ultimate lady’s car), but I would sell somebody else’s firstborn to take a Stradale for a spin around, say, Lake Como for a day or two… with Level 42’s Mr. Pink (or ZZ Top’s Sharp Dressed Man) blasting through the stereo.