Now this came as a surprise to me:

Why Some Americans Won’t Move, Even for a Higher Salary 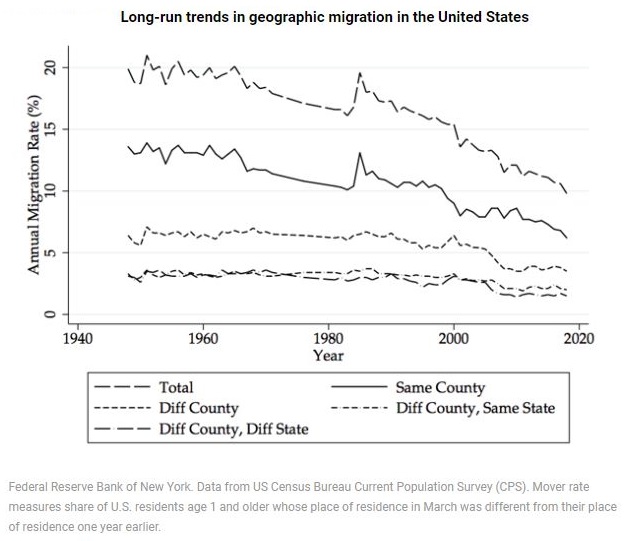 Apart from the Great Wetback Episode Of 1986 (emigration, for those who haven’t been paying attention), I’ve moved around the U.S. on several occasions, mostly for job reasons (better job, more money), and every one of them was wrenching.  And of course none of my moves in the U.S. was from my home town, so I can well imagine that someone who has grown up and spent most of their life in (say) Indianapolis would be reluctant to leave family, friends, business contacts and so on to start all over again in a new location.

Many people, of course, take moving as part of life (I’m excluding Armed Forces folks from this, because moving is part of the deal), and I suppose I’m probably one of them — but that’s because my first move was so comprehensive and so final, the uprooting was total.  Subsequent moves, while somewhat disturbing, were much easier by comparison.

After Connie passed away, I gave serious thought to starting all over again, not just in another town, but even in another country.  During my sabbatical travels, I discovered that the cost of living in the south of France, for example, was about the same as living here in Plano, and for the briefest moment I considered it.  I love France, always have, and with little or no language issue, that part would have been easy.  The cultural change, however, would not  have been easy, and so I didn’t move Over There.  (Interestingly enough, while I love Britain even more than France, that was never an option, because the cultural change would have been even more  pronounced.)

And finally, I realized that the urge to move, to start all over again somewhere else, was more a factor of bereavement than from any desire for change:  so I stopped considering it.

Going back to the chart, however, I am very interested in the downward trend of the phenomenon.  If we assume that when America was still an agrarian, immobile society until the Industrial Revolution caused the mass migration to cities, could it be that the beginning of the study (in the late 1940s) was simply the crest of the wave, and that people were once again preferring to remain settled than to move?

And in recent years, of course, the technology has increasingly been able to support work-from-home or work-from-home-city, so one would expect the incidence of moving to slow even more.  That said, however, if one is able to work from home, then it doesn’t really matter where home is — so people could be expected to move elsewhere to improve their standard of living, say to cheaper housing.  So what do the numbers say about that? 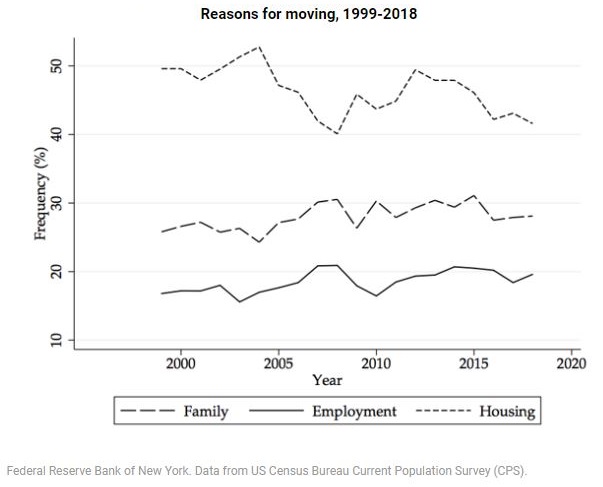 Even the “housing” number has been falling — and I suspect that if one were to take away migration away from high-cost areas like the Northeast and California, the trend would be even more pronounced.  Interesting indeed:  I would have assumed the precise opposite trends, from both  charts, but apparently not.

As always, your thoughts are welcome.