There was a time, a couple decades ago, when South Africa not only generated sufficient electricity for its own needs, but sold its excess to the neighboring African countries (Zimbabwe, Botswana, Namibia, Lesotho, Swaziland and Mozambique).

Well, times change and so do governments.  The much-maligned White supremacist government stepped down and handed the reins of power to the sainted Nelson Mandela’s African National Congress.  Since then, while the stupid ANC government was busy doing Leftwing bullshit and promoting incompetent people into the country’s infrastructure (a.k.a. affirmative action), somehow the maintenance of South Africa’s electricity distribution system was ummm ignored or mismanaged or defunded — because as we all know, this White Man’s Magic runs itself forever.  The result has been predictable.

So:  as of a couple of days ago, onetime electrical exporter South Africa has begun a domestic program of “load sharing” (i.e. rolling blackouts) because the electrical supply has ummm deteriorated to such an extent that South Africa is no longer even self-sufficient.  This never — never — occurred under the Evil White Government, but as with so much in Africa, irony abounds:  Black power has led to no power, electrically speaking;  or, Blacks in  [control] has led to black-outs.  The traditional Seffrican mordant sense of humor comes into play, here: 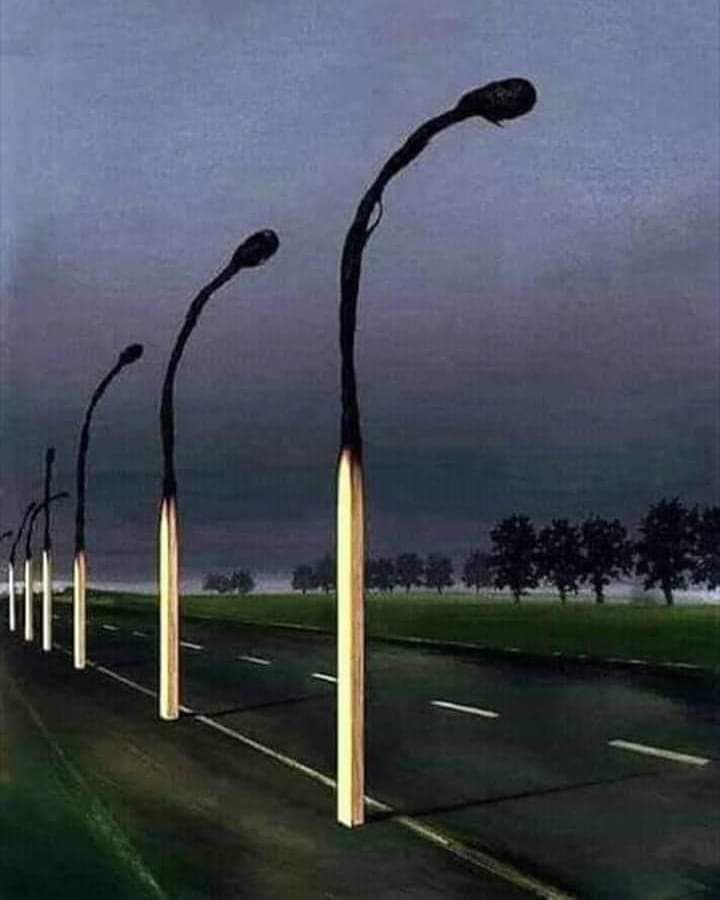 But that’s just the background to the story I really wanted to talk about.

One of the many reasons the old apartheid regime fell was because of the oil boycott foisted on the country by Western nations and the U.N.  Ironically, while South Africa had and has an abundance of mineral wealth (gold, platinum, bauxite, uranium, and coal, to name but some), there was not a single oil- or natural gas field either onshore nor offshore.  This meant that the country had to buy its oil and LNG on the spot market (i.e. from the occasional surpluses in global supply), and since the OPEC-induced shortages of the 1970s, the cost of gas has always been horrendous in South Africa.  (Ironically again, SASOL’s oil-from-coal plants probably saved the apartheid regime’s bacon on several occasions, but there were only a few such production facilities and these were inadequate to cope with any kind of economic growth.)  So that lack of local oil and gas supply has always been a problem, regardless of government.

French oil and gas major Total’s South African offshore discovery could contain 1 billion barrels of total resources and is “probably quite big”, Chief Executive Patrick Pouyanne said on Thursday.
Total said it had made a significant gas condensate discovery after drilling its Brulpadda prospects on Block 11B/12B in the Outeniqua Basin.
“It is gas condensate and light oil. Mainly gas. There are four other prospects on the license that we have to drill; it could be around 1 billion barrels of total resources of gas and condensate.”

Does this mean South Africa will reap the benefits and become oil- and gas independent at last?  Not so fast, Louis.  As Rick Moran points out:

There are several problems with exploiting this find.  Just because their country has made this discovery doesn’t mean it can be developed adequately.  The political situation in South Africa is deteriorating as the country’s far-left-wing government has begun an expropriation of white-owned land.  Such expropriations will force international players to think twice about investing the huge resources necessary to exploit the find. There might even be sanctions imposed on the country if the land grab goes as many observers expect:  badly.  While the bonanza is real, foreign investors may be skittish about participating in the oil rush.
Is the radical left government of South Africa smart enough to bend its economic principles to allow for the proper exploitation of this resource?

Longer answer:  it’s not just the theft of White-owned land and far-Left socialism that would get in the way — for those policies, read: nationalization, à la Venezuela, and if anything causes investors to have cold feet, it’s that prospect — but there’s also the age-old African problem of rampant corruption.  As one South African expat put it, “Most of the investment dollars will disappear into government officials’ pockets long before the first well is drilled.”  (Actually, what he really  said was:  “Those fucking ANC assholes, including [newly-elected president]  Ramaphosa, will rob the thing blind before it even gets started.”)

‘Twas ever thus in Africa, and there is no reason to think that this occasion will be any different.

Ye Olde Buckette Shoppe is not taking any bets on this one.  It’s a dead-cert failure.  Africa Wins Again.