I know that what constitutes the “best” of anything is very much a personal issue, especially as it pertains to entertainment — Mel Brooks’s Blazing Saddles has been hailed as one of the best movie comedies ever made, for instance, yet I can’t watch it past the first five minutes — but I think when to comes to TV sitcoms, it’s not too difficult a job to create a list of at least eight which could be classified as “really, really good, if not the best”.  So here’s what follows for the next eight Saturdays:  my personal favorite TV sitcoms, being defined as those which I could watch (and sometimes have watched) from Episode One through Episode Final, and which I can safely call “the best”.  They are in no specific order, and as with all my lists, their popularity is irrelevant:  I  happened to love them, and that’s all that counts.  Note too that the list doesn’t include many (or any) of the newer shows, simply because I gave up watching TV to any degree in about 2005.  And I’ve excluded cartoons (with one exception), because I’ve only ever watched a few, and none all the way through. Here goes with 1…

Cheers
As ensemble casts go, this one pretty much had it all.  Almost every character was funny and outrageous, and they seemed to take it in turns — sometimes within the same episode — to make the viewer roar with laughter.  My absolute favorite character was George Wendt’s Norm, whose comebacks on entry were one-line classics:

And finally, I will be forever grateful to Cheers for introducing me to Kirstie Alley: 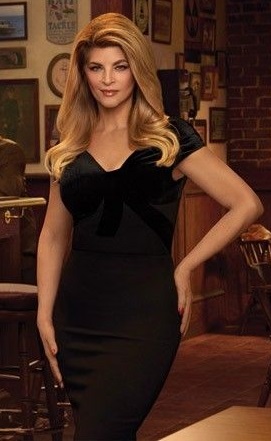